A crowning moment for Expo 2020 Dubai 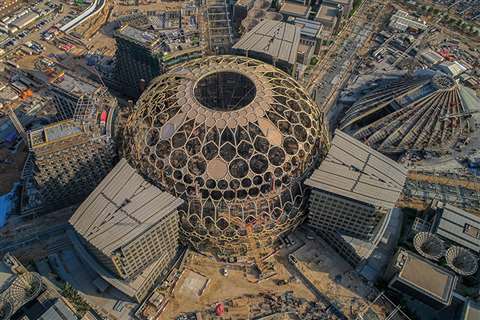 The final piece of the Al Wasl dome in Dubai has been lifted into place after months of planning – built from steel and formed into a trellis – it takes the shape of a crown, topping the structure which encloses a space of 724,000m3 and stands at 67.5m tall.

Higher than the Leaning Tower of Pisa in Italy – the 130m wide domed steel trellis encircles Al Wasl Plaza, a structure that will be the heart of the Expo 2020 site and set to become Dubai’s latest architectural landmark.

After 14 months of preparation, Al Wasl dome’s 22.5m crown, weighing 550 tonnes of moulded steel, had to be precisely positioned on top of the vertical trellis, with a margin of error of only 3mm.

The task was completed using a technique called strand-jacking. Including the structures and equipment required to lift the dome during this process, the total weight was 830 tonnes – equivalent to 600 saloon cars.

It was positioned directly on top of the trellis already in place 45m above the ground and attached using 53 temporary connection brackets.

Working through the night, 800 engineers and construction technicians monitored every millimetre of the process, using GPS indicators throughout to ensure its alignment.

To retain the geometry of the trellis structure as it was lifted, a series of tension cables were installed, connecting the perimeter of the trellis crown to a central temporary compression ring.

Multiple test lifts were conducted to measure the movement of the structure as it was lifted off the ground. The tensioned cables were adjusted until the trellis perimeter connection points were in the positions required for the full lift to commence.

Ahmed Al Khatib, Chief Development and Delivery Officer, Expo 2020 Dubai, said, “Crowning Al Wasl Dome was both incredibly exciting and one of the most challenging engineering operations in the world.

“Lifting such a large and heavy structure involved a huge number of variables. Something as simple as a shift in direction of the wind or change in air temperature could have had a big impact on our calculations, so constant monitoring and reassessment was essential throughout the process.”

His Highness Sheikh Ahmed Bin Saeed Al Maktoum, Chairman of the Expo Dubai 2020 Higher Committee, said that the new structure was, “A significant landmark not just for Expo 2020 Dubai but for the whole of Dubai and the UAE.

“Al Wasl dome will take a lasting place at the very summit of our country’s world-renowned architectural achievements. My heartfelt congratulations go to everyone involved in successfully completing this amazing engineering feat.”

The operation involved hundreds of on-site technicians operating special lifting equipment. Ahmed Al Khatib said, “It was the most exhilarating day of my entire career. We had one chance to get this right.”

During Expo 2020, Al Wasl dome has been planned to be the largest 360-degree projection surface in the world.