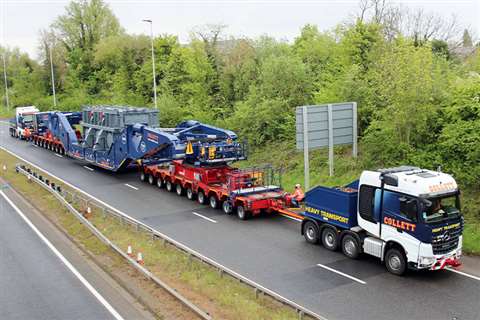 A Hyundai transformer weighing 170 tonnes was transported more than 80 kilometres (50 miles) from a port in Lincolnshire to an electrical substation in Cambridgeshire in the south east of the United Kingdom (UK) by road.

Fully loaded, the heavy transport vehicle had a total height of 4.8 metres and a total length of approximately 66 metres. The extreme size, which included a 42.5 metre rigid section, required the heavy lift team to take a longer 117 km route to the substation.

Prior to the operation, Collett undertook comprehensive preparation to allow the heavy load to complete its journey safely, including the removal of street furniture. The company also carried out additional circumnavigation and reversing manoeuvres at previously identified pinch points along the route.

A convoy of support vehicles. including a private escort company and local police, accompanied the transformer on its journey to the Cambridgeshire substation. Once there, the heavy lift team completed jacking and skidding operations to manoeuvre the 170 tonne transformer onto a waiting plinth for installation.

The transformer will form part of the connection between two UK power substations. Installation of the large piece of electrical equipment is part of a project to replace equipment from the 1960s. According to Collett, the newly manufactured transformer will increase capacity and improve the supply of electricity to homes and businesses in the area.