IPAF’s Global Powered Access Rental Market Report for 2019 again shows that the MEWP rental market is booming, with the worldwide rental fleet nearing 1.5 million units. Persisting Brexit uncertainty in the UK and US Presidential elections set for 2020 muddy the waters somewhat, but in Spain, Germany and the Netherlands the rental market has grown very strongly in the past year.

The annual report is exclusively compiled by leading research intelligence company Ducker Frontier. It gives essential business insight and offers users a unique opportunity to drill down into certain key markets using a series of economic indicators and measurements not available anywhere else. Last year, IPAF and Ducker Worldwide won a prestigious European Rental Association award for business intelligence for these reports

For the past two years, the report has been largely positive across the board, with Europe and the US in particular exceeding expectations and experiencing steady growth. And the European MEWP rental market also sustaining impressive growth across most key indicators in all ten countries under study. In the UK and some Nordic countries, however, growth seems to have plateaued and outlooks are more pessimistic.

The European MEWP rental market as a whole began to show growth in 2015, this was sustained in 2016 and 2017, with France seeing double-digit growth in 2017. This trend continued in continental Europe through 2018, with France and Italy experiencing 7% annual market growth, the Netherlands seeing an 8% increase and Germany and Spain topping the lot, growing by 9% and 10% respectively. Outlooks for these countries are more conservative, forecasting this rapid rate of growth won’t be sustained much beyond the end of 2019.

In 2018, the European MEWP rental market revenue was worth an estimated €2.75 billion ($3.3 billion), the market having grown significantly in 2018 (6%). Several factors underpin this: The overall economic situation is good and both construction and non-construction sectors generated increased demand.

Rental companies expanded fleets significantly (5% growth rate, to 294,035 units) and increased their average utilisation rate (up by 1 percentage point – to stand at 66%). As in 2017, rental companies managed to increase average rental rates (1% European average; 3% in France, 2% in Spain, the Netherlands and Norway).

In the UK continued intense market competition and uncertainty linked to Brexit forced rental rates down slightly (-2%). In Nordic countries, especially Denmark and Finland, rental companies also faced strong overall pressure on rental rates, which remained static. MEWP rental still outstrips construction growth in Denmark, Germany, Sweden and the UK. The level of investment remained significant, as rental companies focused on both expanding and renewing their MEWP fleets with more specialist, more sophisticated and generally greener equipment. It seems 2018 may be a turning point and investment is expected to stabilise from 2019 onwards: Rental companies expect more moderate fleet growth in the coming years and plan to adopt a more cautious attitude, limiting capital expenditures in the countries with the greatest uncertainty in terms of economic outlook. 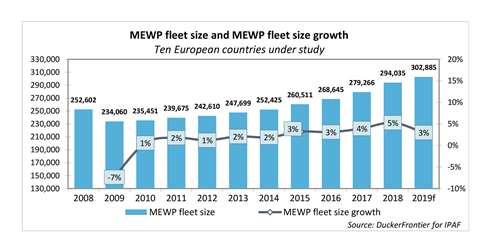 The European MEWP rental market continues a shift towards greener machines. Total share of hybrid and electric equipment remained stable or increased in Europe across all main equipment categories. The market outlook in 2019 and beyond shows that uncertainty prevails, however, in particular in the UK where Brexit is far from resolved, and the ongoing trade war between China and the US is starting to impact the exports of some European manufacturers, particularly in Germany. In the US, the Presidential election set for 2020 is an unknown beyond which few are confidently projecting favourable outlooks.

Though markets are expected to continue to grow, MEWP rental revenue is likely to develop at a more moderate pace while rental companies intend to limit capital expenditure and future fleet expansion. The report also shows that 2018 was another great year for the US market, with stronger-than-expected growth. Double-digit growth in MEWP rental revenue was recorded and total value exceeded $10 billion.

Although MEWP rental companies expect 2019 to be another good year, outlooks remain uncertain as the Presidential electoral year in 2020 is likely to lead to caution in the market. In addition, a recession is possible, which MEWP rental companies seem to be preparing for. The level of cross-hire increased in 2018, caused by strong ongoing market demand.

Sustained fleet expansion continued in 2018 and total MEWP fleet size now exceeds 600,000 units in the US, however in light of the longer-term uncertainty, most US MEWP rental companies expect to scale back fleet expansion in the next few years and potentially focus on fleet renewal instead. 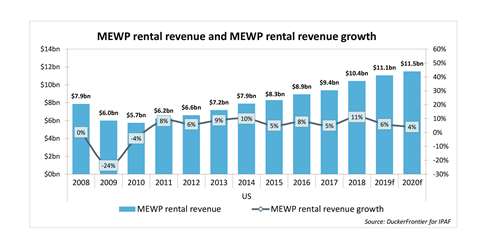 Across 2018, the worldwide rental MEWP fleet size reached 1.47 million units, up from 1.35m at the end of 2017. Strong growth in Asia is being driven mainly by China. Growth was reported in all countries and regions. The report this year also contains a special China market focus, which indicates extraordinary, almost exponential growth, in the country.

In 2018, the Chinese MEWP rental market value was $495m, or €583m. By all measures, 2018 was a particularly good year for the MEWP rental market in China: Several major projects started during the second half of 2017 and positively impacted market growth in 2018 (“One belt, one road” project and other national strategic investments, such as the Hong Kong-Zhuhai-Macao bridge). 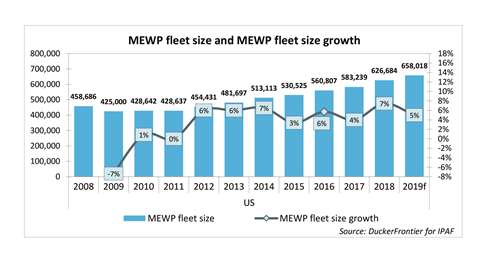 Overall outlook for the market remains positive for the next few years, despite challenges linked to increased competition and to the overall country economy: Many rental companies think downward pressure on the economy will be reflected in the MEWP rental market, impacting growth.

The Powered Access Global Rental Market Report is compiled each year by DuckerFrontier exclusively for IPAF. The report is compiled based on interviews with rental companies and other industry experts globally and the research for this year’s report were conducted in March/April 2018. The report is available to purchase in full via www.ipaf.org/reports, while last year’s version can be purchased at a discount and older versions can be downloaded free. AI