Cruising out of Dover 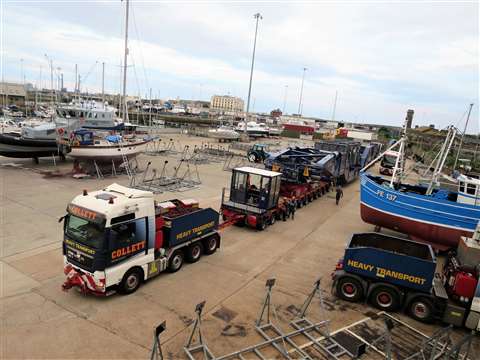 A pair of 335 tonne transformers presented a delivery challenge in the South East of England.

Daher Projects contracted Collett & Sons Ltd for the job. It made the 30 mile (46 km) trip using its 500 tonne capacity Scheuerle girder bridge trailer. The transformers were destined for the Sellindge substation in Ashford, Kent. 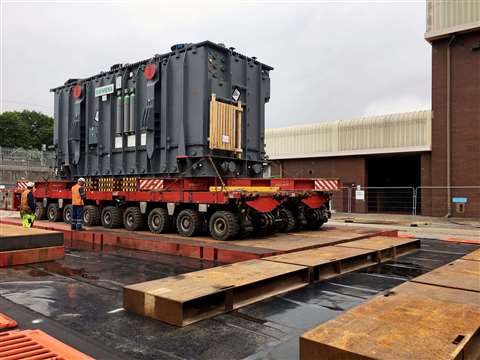 One of the two Sellindge transformers on Scheuerle SPMT

Both arrived together on the same ship. The first one was lifted from the hold and placed on self propelled modular transporter (SPMT) before being put onto stools for storage. The second unit was lifted off the ship and loaded straight into the girder bridge trailer. Collett left at 10 p.m. with the 79.5 metre trailer. Arrival at the Sellindge substation, was six and half hours later.

The route from Dover took in the outskirts of the town of Folkestone before hitting the M20 motorway towards the site. Planning for the job started in January 2019. Meticulous surveys were made of the route, Collett said, including topographical surveys and swept path analysis to identify any required modifications and street furniture removals.

Part of the plan was an alternative to an impossibly tight right turn on one of the M20 junctions. The transport continued on towards the next junction at Ashford. There Collett manoeuvred the 79.5 metre vehicle and headed back down the motorway in the opposite direction. Back at Junction 10 the convoy joined the A20 main road before reversing into the site’s access road and on to the site itself.

Options for moving on site were restricted by length so operations began to transfer the cargo from the girder bridge to SPMT. Mats, supports and beams were positioned under the transformer before the girder bridge hydraulics were used to lower it. The side frames of the bridge were then driven clear. Climbing jacks lifted the transformer high enough to get SPMT underneath. A 4-file, 10-axle configuration with power pack was used.

With it jacked back down onto the SPMT it was manoeuvred to a temporary plinth ready for a jacking and skidding operation to get it into its final position.

Collett then went back to Dover for the second transformer, following the same procedure as the first one. 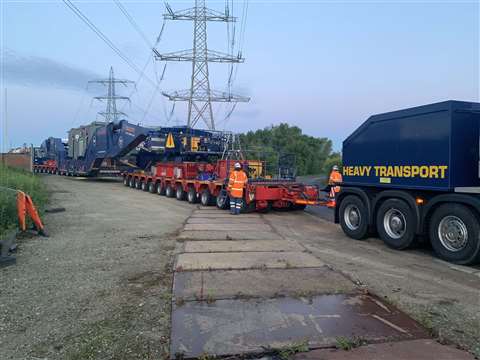