A new report has listed 50 ‘construction mega cities’ around the world for 2019 which all have a pipeline of construction projects valued at more than US$30 billion. 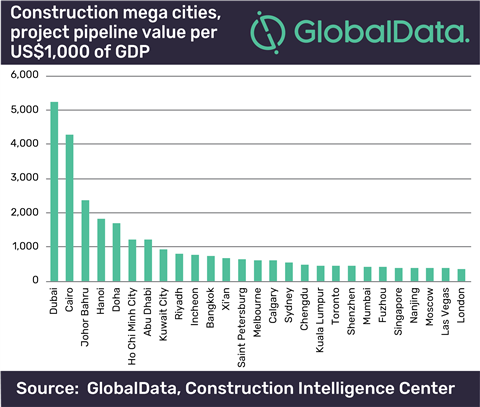 Construction projects per US$1,000 of GDP

The combined value of the project pipelines in these cities stands at US$5.3 trillion, and includes over 8,200 projects at various stages of development.

Dubai in the UAE is at the top of the list with total project values amounting to US$611 billion. London is in second place with US$342 billion and New York in third with US$285 billion.

Seven new cities have made it to the 2019 list: Istanbul, Tokyo, Fuzhou, Zurich, Atlanta, Zhengzhou and Las Vegas.

The Asia-Pacific region dominates the list, accounting for 25 of the 50 cities, and has a combined projects pipeline valued at US$2.1 trillion.

Yasmine Ghozzi, economist at GlobalData, said, “Of the 50 construction mega cities, 29 are considered to be in emerging markets. The rapid growth of cities in the emerging regions reflects both above-average population and per-capita GDP [Gross Domestic Product] growth.

“The population of those 29 emerging-region cities will reach an estimated 327 million by 2025, at an annual increase of 1.8% from 237 million in 2007. At the same time, GlobalData projects that the real GDP per capita (measured in real terms) in these emerging urban centers will increase by 2.4% from between 2007 and 2025.”

The report also highlights Mumbai in India, which is the fastest-growing city economy, partly due to the government’s infrastructure investment.