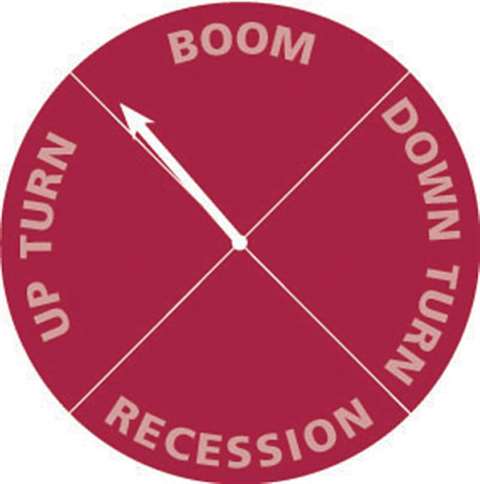 Sentiment about future prospects for the European construction industry was its strongest since 2007, according to the results of the February CE Barometer survey. A positive balance of +53,2% of respondents said they thought activity would be higher in a year's time. The last time this measure of sentiment was so high was July 2007.

There was also good news on current activity levels, with the workload bouncing back following a seasonal slowdown in January. A positive balance of +3.9% of respondents said activity was higher in February than in January, compared to the January result of -9.5% seeing a slowdown since December.

With both measures of confidence in positive territory, the arrow of our clock pointed to the 'boom' segment. The particularly positive views expressed about the future were the main contributor to the length of the arrow, which indicates the strength of sentiment.

However, the relatively weak sentiment about month-on-month activity is the reason why the arrow is hovering close to the 'upturn' segment. This illustrates that while this measure of confidence has been broadly positive since last summer, sentiment remains fragile.

Another important point to make is that the CE Barometer only shows the way the markets are moving, and what proportion of respondents are feeling that change. It does not and cannot give any indication of how much activity is rising or falling.

CE would like to thank all those that took part in the February survey. It was completed by more than 300 construction professionals in 30 countries around the region.