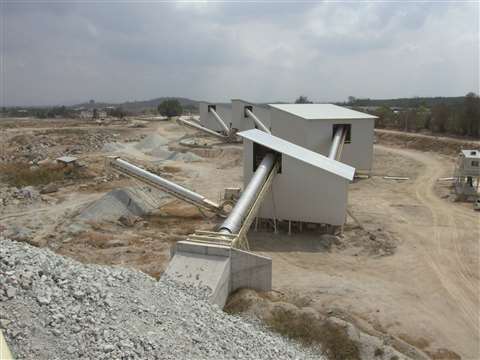 A new quarry in Chonburi near the Thai capital Bangkok has at its heart what is thought to be the most sophisticated crushing and screening plant ever commissioned in Thailand. Chris Sleight reports.

Despite the political instability of the last few years, by all accounts the Thai construction sector is still growing well. Indeed, the strength of investment in infrastructure and building associated with the booming tourist industry has given one quarry owner the confidence to invest THB 250 million (US$ 8 million) in setting up a new 1 million tonnes per year granite quarry.

At the heart of the facility is a turnkey crushing and screening plant supplied by Metso Minerals. It is the first turnkey plant Metso has ever supplied in Thailand, and with high levels of automation and instrumentation, it is thought to be the most sophisticated plant ever built in the country.

The quarry owner is Thai Crushing Plant (TCP), which is a 50-50 joint venture between French road building group Colas - part of Bouygues - and the Supsakorn family - Thai industrialists. TCP's general manager of administration, Apapat Kositpatana, is certainly proud of the new facility. "This is out masterpiece. It is a showcase for out company," she said.

The company's quarry at Chonburi, some 120 km east of Bangkok, is a 100 ha new development. TCP acquired the land in 2005, and has spent the intervening time clearing the overburden - more than 1 million tonnes of material, which has been sold to land reclamation schemes - and getting the various operating permits for the quarry in place.

All this material will be processed by the three-stage Metso Minerals plant, which was built by local contracting partner Thai Rung United Engineering (TRUE) to a bespoke design produced by the Metso Minerals Systems organisation, based in Macon, France.

The larger material is conveyed the secondary crusher, a Nordberg HP300 cone set at a fairly coarse 40 mm. The finer material goes to the tertiary cone crusher - another HP300, but set with a much narrower closed side setting of 18 mm.

End products are classified with two three-deck TS303 inclined screens, and this means the plant can produce a up to nine different products. These include all the conventional aggregate grades, as well as road base material and rail ballast.

According to Kejkanoek Uawithya, managing director of Metso's distributor in Thailand, Uawithya, just having a plant that can produce this many products is something of a boon. "Normally in Thailand the plants only produce three or four products - that's if you're lucky," she told iC.

But it is not just the range of products that sets this plant apart in Thailand. Belt scales and sensors above each crusher unit provide information about the quantity of material at any point in the circuit. This information is fed back to the control room, form where just one person can operate the entire plant and ensure high production levels.

As Ms Uawithya explained, "The crushers are basically full all the time. The utilisation of the plant is over 90%."

The reason this is important, and essentially the reason that TCP opted for an expensive (in capital terms) crushing plant, is running costs. Crushing stone requires lots of electricity - the HP300 cones are 200 kW units and the C125 is rated at 160 kW. Over a 48-hour week that adds up to about 26 GWh of electricity - thousands of Dollars worth. With energy costs rising all the time it is crucial that the maximum amount saleable products is produced for every KW of electricity.

"All over the world there is huge pressure on energy consumption and productivity. When you have a plant like this it really will be the most effective plant in Thailand. People really didn't think like that 10 years ago when no-one cared about electricity costs," said Ms Uawithya.

As well as its energy efficiency, the Chonburi plant scores well on other environmental fronts. Particular attention was paid to keeping the dust down with encapsulated buildings and conveyor belts. According to Ms Kositpatana, this fact alone makes the plant stand out. "The dust encapsulation on the conveyors is a new idea in Thailand," she said.

According to Ms Uawithya, Thailand's market for aggregates is about 50 million tonnes per year, supplied by some 250 quarries. However, the sector was much bigger before the financial crisis of late 1997. "There used to be about 500 before the economic crisis," she said.

But whatever the historic perspective, the construction industry is booming in Thailand at the moment, particularly around the capital. "We try to locate our plants around Bangkok - within about 100km. The big markets are around Bangkok. All the major companies in the quarrying sector are focussing on Bangkok," Ms Kositpatana.

In addition to spending on infrastructure, growth in the tourist industry is seeing new hotels and leisure complexes being built, along with other associated developments. "There is a lot of foreign investment in the area - lots of retirement homes and apartments. Regardless of the political environment, there is a lot of investment going on in Thailand," said Ms Uawithya.

Although the markets are buoyant in general, most of the production from TCP's Chonburi plant is already spoken for. It has a sister company, Thai Slurry Seal (TSS), which operates ready-mixed concrete plants and asphalt plants in the Chonburi and eastern Bangkok areas to feed the region's booming road construction sector

It is an area that is getting more and more investment, partly because road fuel prices have risen so sharply over the last two years. Ms Uawithya said, "Fuel costs are a problem and there is a lot of emphasis on logistics and improving infrastructure to help save fuel. Even food is more expensive now because it is more expensive to transport it."

With strong end markets and a state of the art plant coming on line, Ms Kositpatana's pride, bullishness and enthusiasm are understandable. Compared to other quarries in Thailand, TCP's Chonburi plant is clearly leaps and bounds ahead of the competition. If this translates to cheaper and better aggregates in this booming market, other producers may have to improve their facilities to stay in the game.