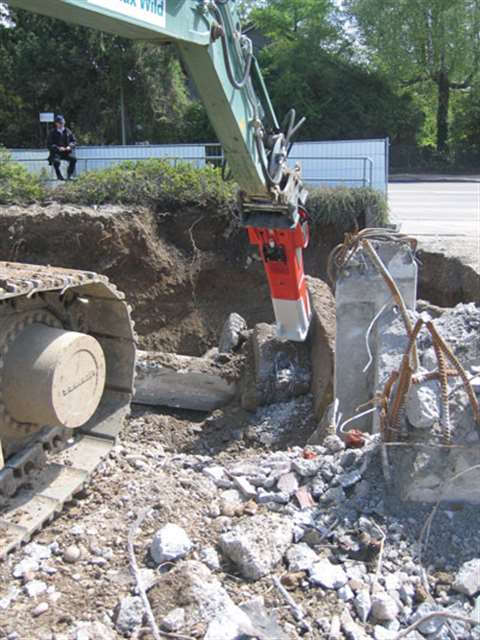 German contractor Max Wild has been contracted to demolish the Haseltalbrucke motorway bridge on the A3 near Berkheim to allow its replacement with two new spans, the south of which has already been completed. Before the new north span can be built, however, the old bridge (originally completed in 1961, and substantially reinforced in the period between 1985 and 1987) has to be removed. It consists of reinforced concrete piers supporting a metal road deck. Max Wild first cut up the latter and lowered it in sections to the ground, where it is further cut up and then shipped off site for recycling.

Max Wild is using explosive demolition techniques on the piers, which are up to 65 m (214 ft) high and 6 m (20 ft) in diameter with a wall thickness of 0.5 m (1.6 ft). The pairs of pillars are connected at the top and are of solid concrete construction for the top 6 m (20 ft). Part of the preparations for the blasts involves preweaking the twin piers by breaking out windows in each pier to weaken the design of the structures.

To achieve this, three new Sandvik BR4099 breakers (formally launched at bauma 2010) are being used, mounted on Liebherr LH934C and LH944C excavators. Each is equipped with Liebherr's hydraulic LIKUFIX quick hitch system to allow rapid attachment changes from the cab.