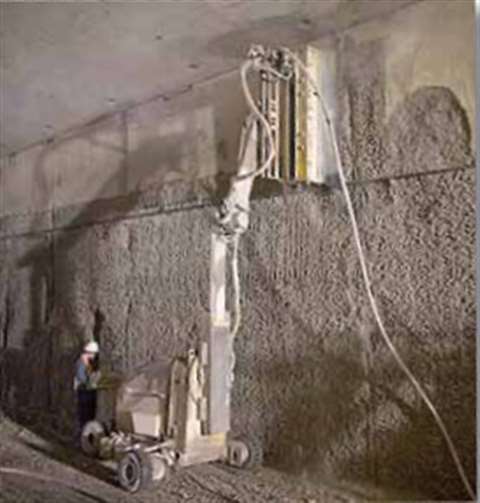 Conjet hydrodemolition robots worked to remove fire-damaged concrete from a tunnel in the Newhall Pass on the I-5 Interstate near Santa Clarita, California

A serious fire brokeout in the tunnel of the Newhall Pass on Interstate 5 in California, some 30 miles west of Los Angeles, following a multi-vehicle accident, which in the endinvolved a total of more than 30 vehicles Flames, whipped up by winds engulfed the full length of the tunnel, which carried southbound traffic only. Temperatures running as high as 1,400°C (2,550°C resulted in portions of the surfaces of the reinforced concrete 183 m (600 ft) long two lane tunnel being damaged and splitting.

US specialist hydrodemolition contractor and rental operation HydroPressure Cleaning Inc, was on the scene early after the fires had died out and the necessary repairs were assessed. Initially, the company used a Conjet 322 robot, operating under a range of water pressures to remove concrete in patches along the length of the tunnel to allow engineers to assess the scale of the problem.

HPC eventually also brought a larger Conjet 363 unit that was capable of processing 68 m2/h (730 ft2/h). In the initial emergency repair contract with contractor Chumo, the company removed some 595 m2 (6,400 ft2). During the subsequent concrete replacement contract, which was supervised by contractor Security Paving, HPC had around 2,452 m2 (26,400 ft2) of surface preparation and concrete removal to carry out. This it achieved by working two 12 hours shifts in just four days.