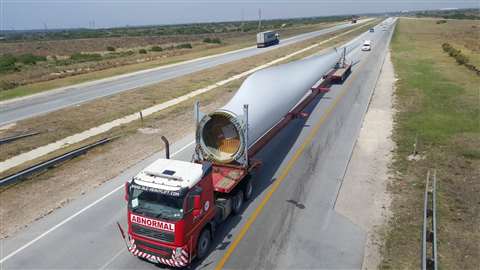 ALE transport the last blade for the Amakhala Wind Project

Global heavy lift and transport company ALE has finished the delivery of 560 wind turbine generator components for the eight-month long Amakhala Project in the Eastern Cape of South Africa.

ALE was contracted to provide the handling of the wind turbine generator components, made up of 10 components each, namely three blades, one nacelle, one rotor hub, one drivetrain and four tower sections. The components ranged in weight and dimensions, and involved the longest blades transported to date by ALE at 57.5 metres.

The UK-based company was the first in South Africa to make use of a new laydown outside the Port of Ngqura and the components arrived by means of eight geared vessels.

ALE were responsible for receiving the components at the Port of Ngqura, transporting them to temporary storage and then to site, located 250 kilometres away in Amakhala, Bedford, before finally offloading the components on site. A team of 50 ALE employees were involved in the operations. To handle the components ALE supplied two mobile cranes and one telehandler for the port operations and the components travelled together in convoy consisting of 10 special abnormal load trailers, 20 ALE light vehicle escorts as well as the presence of the police escort to site.

Once on site ALE offloaded the components using two mobile cranes and one telehandler with a rigging crew and site manager to oversee and co-ordinate the offloading operations.

The feed rate was to deliver two complete turbines per week, consisting of 20 components in total.

ALE project manager, Zayno Myburgh, said, “During the project we faced the challenge of negotiating the Olifantskop pass. As the lanes were too narrow for traffic in both directions, the traffic police had to close the pass for oncoming traffic for two hours in the morning. This meant that we had to overcome any potential delays.

“We have invested in specialist and advanced wind equipment, which has enabled us to carry out projects like these within set timescales and to the highest quality and safety standards. We are delighted to deliver all 560 components on schedule and the successful completion signifies our strengths in utilising our specialist personnel and equipment for our clients in the wind energy sector.”