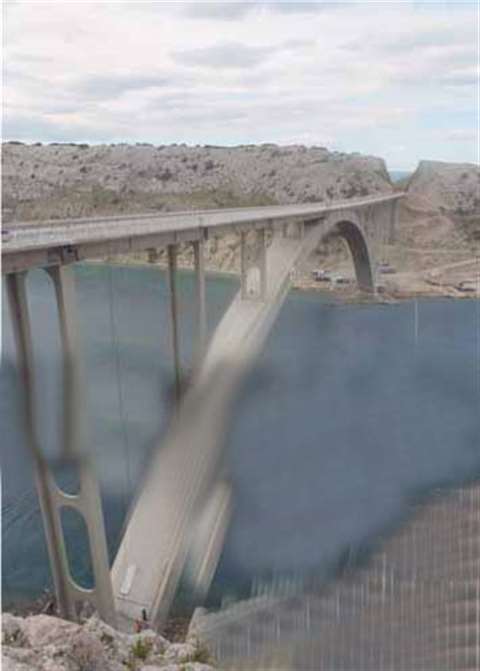 The Kirk bridge: salt damage to the concrete structure had to be repaired

Conjet AB's hydrodemolition equipment has been used during the replacement of the salt-corroded concrete structure of the double arch Kirk Bridge in Croatia.

The Kirk Bridge, opened in 1980, links the northwest Croatian mainland at Kralievica, just south of the major port of Rijeka, with the islands of Sveti Marko and Kirk. Owned and operated by Hrvatsje autoceste (Croatian Highways Authority), the bridge has during its life been exposed to high winds that pick up salt from the sea.

This had caused unexpected calcium chloride damage to its structure, which required complex and challenging repairs to be carried out, expected to cost a total of €3 million (US$3.9 million).

These repairs involved the reskining of roughly two thirds of the bridge's smaller arch with a new concrete sprayed concrete cover, with the €1.5 million (US$1.95 million) contract fo the work to remove the bottom third o each end of the arch awarded to Split based specialist contractor Spegr Konstructor Inzenjering.

Hrvatsje autoceste specified that hydrodemolition be used to remove the contaminated concrete up to one third of the height of the arch. Initially Spegra considered the use of hand lances, but decided that it would be too dangerous and difficult working by hand at the heights required and in the windy conditions likely to be encountered.

A Conjet Jetframe 122 unit with a CCU 197 control unit, adapted to work with a special frame and access scaffold designed by Spegra, was therefore used to remove the surface concrete to a depth of 30 mm over an area of 2,000 m2 from all four faces of the rectangular section of the arch, which is 8.3 m (27.3 ft) wide by 4 m (13.1 ft) deep. The standard frame was modified to allow the nozzle to move 9 m (29.5 ft) and the special scaffold allowed the unit to work on the 45° slope of the arch.

Using its special wheel mounted cross frame, the Jetframe could cut an area 8.3 m (27.2 ft) long by 1.5 m (4.9 ft) wide on the top and bottom faces in around 45 minutes. To work on the underside of the arch, the Jetframe was suspended on a frame and working platform, in turn suspended by Dywidag bars from the top frame. To work on the sides, another special frame was suspended from the top frame that allowed an area of 4 m (13.2 ft) by 1.6 m (5.3 ft) to be cut in a single movement.

Following the hydrodemolition phase, the rough exposed concrete was washed and then coated with a gel inhibitor, followed by another washing. Mortar that contains high strength micro silica was then sprayed onto the prepared surface to a depth of 40–50 mm, depending on the scarified surface irregularity, and then smoothed. This was subsequently covered with a 1 mm think polymer paint layer.

Spegra has also tendered for the contract from Hyrvatske autoceste for similar renovation work on the bridge's second, wider arch, work that will start during the first half of 2007.