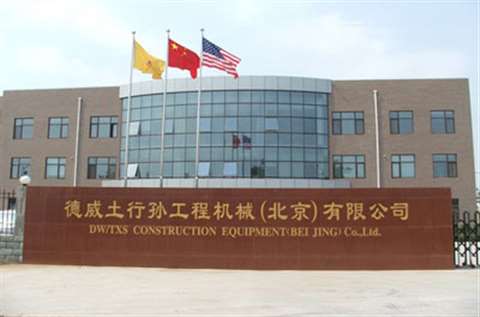 The DW/TXS premises in Beijing.

Chinese horizontal directional drilling (HDD) equipment manufacturer DW/TXS is doubling the size of its production facilities in the Tongzhou district of Beijing. The extension is expected to be completed by the end of the year.

Established in late 2008, DW/TXS is a joint venture between two specialists in HDD equipment - the US-based Charles Machine Works, which owns Ditch Witch, and Tu Xing Sun (TXS), a Chinese company set up in 1998 to serve the emerging market for trenchless equipment and now one of the largest local players in the sector.

The joint venture's range is based on the TXS product family and comprises 14 standard HDD rigs spanning the 10 tonne to 600 tonne pullback classes. Interestingly, the range goes much higher than Ditch Witch's, which tops-out with the 100000 lb (45 tonne) pullback JT100 model.

The reason for this according to Autumn Steinert, China business development manager for The Charles Machine Works is that much of the business for DW/TXS is focussed in the oil & gas sector where there is a demand for much bigger rigs to install large diameter pipes over long runs.

There are other differences of course, and although there is some crossover in products, Ms Steinert said competitive issues are not a problem for the two partners. Ditch Witch machines are seen as premium products, with TXS positioned at the entry level.

But it is growth at heavier end of the market has driven expansion plans. "A lot of it has been driven by demand for larger rigs. You need more space just because the components are so much bigger," said Ms Steinert.

And according to Ms Steinert, there is good demand for this type of machine outside China, particularly in Russia and the CIS. "We see opportunities in emerging markets," she said.

But that is not to say demand and growth is only coming from the heavy end of the market. There is also strong interest in utility class machines - below about 45 tonnes of pullback, which is linked to the rapid expansion of China's cities and the need for all sorts of utilities.

"There are a lot of growth opportunities, especially as you look at the emphasis on urbanisation in the five-year plans," said Ms Steinert. However she added, "We're not seeing the same boom that you see in excavators for example, because it's still a niche market."

And the immediate future of the company is to serve that growing niche in China, although who knows what the future holds? On the US side of the partnership, the Charles Machine Works' Ditch Witch subsidiary was founded on trenchers, and this would seem to be an obviously complement to the current range of HDD machines.

According to Ms Steinert, it is not a hugely attractive market at the moment, but as in the HDD sector, the best prospects may be at the heavy end. "Frankly in a lot of trencher markets we're competing against manual labour, but we see some opportunities in larger trenchers," she said.