Regardless of the knowns, there are always a few unknowns that are presented in a complicated heavy haul project. Such was the case for Edwards Moving & Rigging, which was contracted to transport six oversized press components to a manufacturing plant in Kentucky. 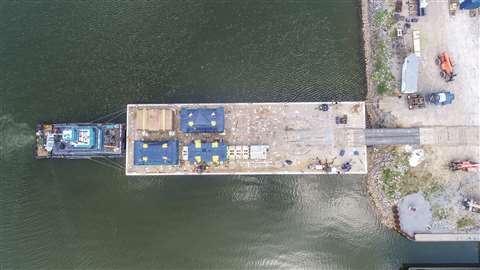 The six components were staged on a waiting deck barge and then transported on inland waterways to the Eddyville Riverport located on Barkley Lake in Eddyville, KY.

The six press components arrived at the Port of New Orleans via sea vessel where they were direct discharged via the ship’s gear to Edwards’ prearranged beams and stands that were staged on a waiting deck barge. The press components were then transported on inland waterways to the Eddyville Riverport located on Barkley Lake in Eddyville, KY. 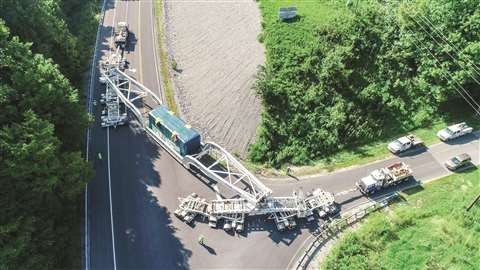 Negotiating turns required precise planning as well as a pull and push truck.

At the Eddyville Riverport, the barge was received by Edwards, and all six press components were rolled off using Edwards’ Goldhofer system that was configured as a 12-line PST/SL trailer. Each press component was again staged on beams and stands.

Edwards’ team then used its J&R Engineering 700-ton capacity gantry with Powerlinks side-shifting capabilities to load the components onto its Aspen 500 trailer. The Aspen 500 was 356 feet long, 20 feet 6 inches wide and weighed 800,000 to 1,020,413 pounds, depending on the component. The trailer was configured as a DLL 16 with perimeter frame.

Each component was transported 49 miles to the manufacturing facility. Edwards’ team performed all six transports, including route surveys and permitting. Once inside the facility, mud mats had to be placed as mitigation where the roadway wasn’t wide enough. 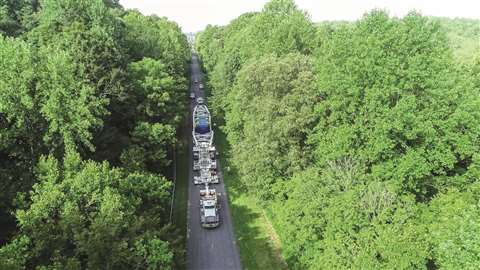 The press components were transported individually 49 miles to the manufacturing facility.

The press components were delivered to Edwards’ onsite gantry for offload from the A500. The gantry then loaded each component to a Goldhofer PST/SL 9-line trailer to be moved within the facility.

“A few days before the first scheduled transport a construction project, not revealed in our planning meetings, began in the middle of our selected route,” said Tobias Epple, director business development Europe, Edwards Moving & Rigging. “The Kentucky permitting group required an immediate shift to a much more challenging and longer route due to the size of the transport configuration.”