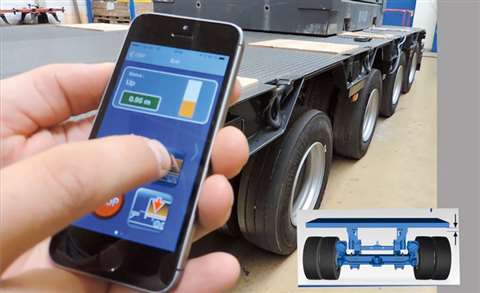 The iTAP system in action

Knorr-Bremse, a manufacturer of braking systems for commercial and rail vehicles, has developed a remote control app that allows the driver to control trailer functions.

The intelligent Trailer Access Point (iTAP) can be used for controlling Goldhofer semitrailers with independent suspension like the new MPA generation, the manufacturer said. It allows drivers with heavy loads, for example, to use their smart phones to adjust ride height.

Volker Schmidt, Goldhofer chief design engineer, explains, “The driver no longer has to leave the cab to make certain changes to the trailer. In the past, for example, the driver had to get out [of the cab] to adjust the axles on the trailer.”

The system was a joint development project between Knorr-Bremse and Goldhofer. It is installed directly on the trailer as an extension to the EBS module. In addition it has its own WLAN, independent trailer functions (which can be controlled independently of the tractor) and four pre-programmed and two freely programmable axle heights the manufacturer said. Access to the system is password-protected. The iTAP module also provides information on tyre pressures and monitors temperatures. In addition, if a tyre is damaged, the system automatically generates an alarm.

Stefan Fuchs, Goldhofer CEO, said, “I am delighted that we have been involved in the development work as the chosen partner of Knorr-Bremse and that we can once again offer our customers meaningful added value.”