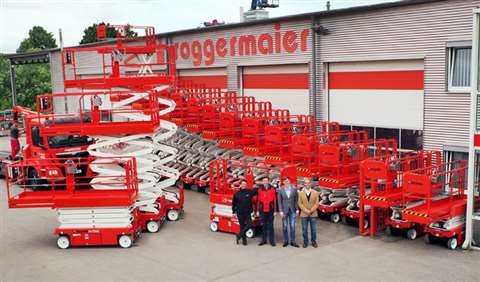 German rental company Roggermaier took delivery of the first of the new Snorkel electric scissors in Europe at the beginning of June.

Roggermaier placed an order for 50 of the new lifts at The Rental Show 2015 in February when they were unveiled for the first time globally.

The first batch of 18 Snorkel S3219E’s and 4 Snorkel S4732E’s have already been delivered and will be deployed into their rental fleet immediately.

Founded in 1983, Roggermaier is a family-owned enterprise which ranks among the biggest rental companies in Germany today with over 1400 machines in its fleet and 130 employees.

They serve a diverse base of clients, in sectors ranging from construction, energy, automotive, telecommunications, the film industry as well as municipalities and trade shows

Snorkel delivered the first of the new scissor lifts earlier this month, and provided detailed technical training to Roggermaier’s service team to ensure a smooth transition into their fleet.