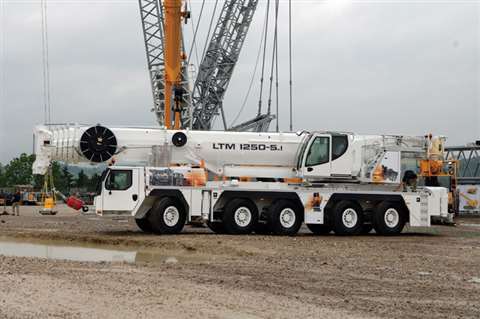 Applications for all terrain cranes can be stretched from infrastructure projects to the energy sector, including wind turbine erection and maintenance, or even road building projects.

This versatility means that manufacturers need to design models that suit not only a wide range of industries, but a range of markets as well. To meet demands, manufacturers tend to offer different engines and other technologies for different parts of the world. As Rick Curnutte, Link-Belt product manager for telescopic truck and all terrain cranes, explains, Link-Belt has designed both of its all terrain cranes, the ATC-3210 and ATC-3275, to be available with Tier III engines for different regions of the world. In addition, the company has focused on simple designs for operation and maintenance, which makes them popular in developing markets where operators and high tech mechanics can be difficult to find.

Curnutte adds, “All terrain cranes are an ideal choice when soft, uneven terrain and steeper grades exist and they can reduce costs in those situations, compared to other mobile crane types that might experience mechanical issues or accelerated wear in those same conditions.”

In Europe, two- to three-axle models popular, largely because of strict and varying road regulations, which is a hindrance for worldwide operation. As Michael Klein, Terex Cranes manager product marketing, explains, nearly every country has specific axle load and axle spacing regulations. To meet these demands, manufacturers have to make cranes that are roadable in all key markets.

For manufacturers such as Terex, this has meant creating an all terrain range (the Explorer) that offers varying axle spacing, short front overhang, optional boom-off solution or dolly preparation, to name a few. Other advantages of all terrains are roadability and short rigging times, as Klein explains, “Many all terrain cranes can rig themselves and smaller models like the Challenger are designed for one-man-operation and, therefore, can do many jobs without needing additional transport.”

Alongside the demand of meeting varying road regulations, manufacturers also need to keep all terrain cranes flexible. As Wolfgang Beringer, Liebherr sales promotion points out all terrains tend to be a favourite buying option for rental companies as they are more flexible than rough terrains or truck cranes.

Latest designs
The latest all terrain crane from Tadano is the ATF 600G-8 with Triple Boom system. The new eight-axle model has a 600 tonne capacity, a 15.3 to 56 metre boom, 24 to 90 m boom extension and a maximum working radius of 104 m. The main feature of the new model is its Triple-Boom system, which has three telescopic tubes designed to increase torsional stiffness. It also helps increase the model transport efficiency, as end users do not need to transport a boom suspension system. “It’s pure physics,” the manufacturer explained. “The further away the materials of a load bearing structure are from the centre of that structure’s cross section, the more stable the overall system will be.

“It is precisely this principle that we employed in our new Triple Boom system. The mass of the total amount of available steel is no longer distributed in just one main boom but, instead, between another two telescopic tubes connected by what we refer to as partitions. These tubes are further away from the centre of the system’s cross section, which makes the overall system much more stable than a conventional single telescopic boom system.”

The ATF 600G-8 is also fitted with an asymmetric outrigger base control and has the Hello-Net fleet management system. In addition, it is powered by two Mercedes Benz Euromot 4 / Tier IV Final engines. A 460 kW (626 HP) unit is in the carrier and a 260 kW (354 HP) engine in the superstructure is for crane operations. The new range-topping crane is 21.7 m long, 3 m wide and 3.93 m high. Its transport weight of 96 tonnes keeps it within the 12 tonne per axle limit. Thomas Schramm, Tadano general manager sales and marketing, said, “The ATF 600G-8 is the result of close collaboration with our customers. We have been able to design this new crane to fulfil [their] requirements exactly.”

New from Manitowoc is the 250 tonne capacity Grove GMK5250L. The five-axle model has a VIAB turbo clutch, a 70 m main boom and also includes Grove’s Megaform shaping for better strength and stability, the manufacturer said. For more on the new model, see product news on page 15 of the July issue of International Cranes and Specialized Transport magazine.

As the July issue went to press, news just came in of a 250 tonne capacity all terrain crane on five axles new from Liebherr. The manufacturer describes its LTM 1250-5.1 as “the most powerful 5-axle mobile crane on the market.” It was unveiled to around 3,000 people at the Customer Days event on 17 June at the wheeled and crawler mounted mobile crane factory in Ehingen, Germany.

The LTM 1250-5.1 succeeds the LTM 1220-5.2 and is the third model with a single engine design. Load capacity is 15 to 20 % greater than its predecessor and it has the same 60 metre boom length. Lattice extensions can increase hook height to 110 m. A 50 m fixed jib is available and the 12.2 to 22 m folding jib can be extended in 7 m sections to 36 m. Another option is hydraulic adjustment up to 45 degrees under full load. Some of the sections can also be used on the 200 and 220 tonne capacity models.

Other features of Liebherr’s new 250 tonner include the VarioBase variable outrigger system and Eco mode to save fuel. VarioBallast is a new feature that allows operation with two ballast radii, of 5.58 m or 4.78 m. For operation in confined spaces the ballast radius can be reduced by 800 mm using mechanically swivelling ballasting cylinders. Maximum ballast is 88 tonnes with a maximum width of 6.3 m. The 1 tonne base plate and the next 10 tonne ballast plate are the same width as the vehicle. Width is 4.1 m with up to 68 tonnes of ballast.

Power for the LTM 1250-5.1 is from a 400 kW six-cylinder Liebherr diesel engine in the carrier to Stage IV / Tier 4f emissions regulations. It drives via a 12-speed ZF AS-Tronic automated manual gearbox. For low speed manoeuvring on site there is a two-stage low range gear. For braking there is an intarder integrated in the gearbox. An additional Telma eddy current brake is also an option.

For crane operations, the hydraulic pumps in the superstructure are powered via a mechanical shaft from the engine in the carrier below. High efficiency of a mechanical shaft and low engine speed in the chassis engine “ensure the economy of the new concept in terms of fuel consumption,” the manufacturer said.

Also new from Liebherr is the LTC 1050-3.1, which was launched at the Intermat exhibition in April 2015. The 50 tonne capacity three-axle model is a successor to the LTC 1045-3.1. It features the VarioBase outrigger system, ECOmode for more efficient crane use and is powered by a single 260 kW (354 bhp) 6-cylinder diesel engine. It has a six-section 36 m telescopic boom, which can be extended and bolted automatically using a telematic controller. In addition, it has a 13 m double folding jib that includes a 1.5 m assembly jib which can be set to an angle of up to 60 degrees, the manufacturer adds. A three-roller compact hook block with a double hook is also available, as is an optional second winch.

From Link-Belt is the 210 US ton (185 tonne) ATC-3210, the company’s second US-built all terrain crane. Rick Curnutte Link-Belt product manager for telescopic truck and all-terrain cranes, says, “The ATC-3210 debuted a little over a year ago. At just under 65,770.9 kg, the ATC-3210 can transport in a three-axle dolly configuration with a three piece hydraulic fly, auxiliary lifting sheave, hook block, ball and main and auxiliary winches. In this transport scenario, each of the ATC-3210’s axles stay below 9,071.8 kg and overflow loads do not exceed 20, 412 kg.”

Michael Klein, Terex Cranes manager product marketing, says, “The benefits of our Explorer family are good jobsite accessibility due to different steering modes and compact design, as well as a high versatility because of asymmetric outrigger positioning and remote control. The cranes are quickly ready for work due to automated counterweight rigging, automatic levelling and storage boxes where needed.”

The Explorer models are also available with the new IC-1 Plus system, which enables the cranes to work with asymmetric outrigger setups. It also provides additional safety features such as automatic counterweight detection and a safety radar of the working area, which is visible on control screen.