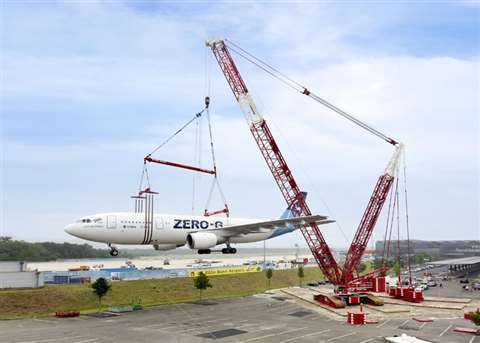 Sophisticated hanging gear: the combination of cross beams and spreaders was able to adjust its angle to the appropriate centre of gravity using an electric chain hoist

The aircraft, named Zero-G, had been put out of service, ready to become a museum exhibit for the general public. The aircraft weighed 82 tonnes and measured 54 metres long. It was lifted using a 600 tonne capacity Liebherr LR 1600/2 lattice boom crawler crane.

The attachment equipment weighed a total of 19 tonnes and included two cross beams and three load spreaders developed by Riga Mainz. Once loaded, a remote-controlled chain hoist was used to adjust the crane hook over the overall centre of gravity. This made it possible to adjust the required angle of the aircraft to the horizontal to generate no upthrust in the event of wind and inflows from the front, a company spokesperson explained.

It took around an hour to lift the Airbus into its final position. The aircraft was slowly turned 180 degrees before the LR 1600/2 crawled a distance of around 20 m on a specially laid gravel bed, before the load could be set down onto three foundation points.