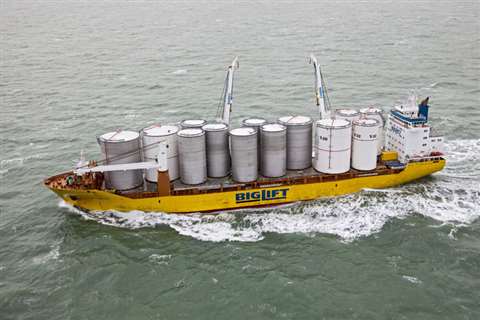 A group of Dutch companies collaborated on the movement of 13 large but light storage tanks aboard a heavy lift ship.

Biglift Shipping’s Happy Delta carried the steel storage tanks for a client in Jubail, Saudi Arabia. Weight was no issue because all together the chemical tanks only weighed 900 tonnes but they occupied a volume of 40,000 cubic metres.

Broker Vertom asked BigLift to ship the tanks for Sloot Tankbouw, which built them, with the help of Broekman stevedores.

The largest tanks weighed 106 tonnes and were 14 metres in diameter and 20.8 m tall. BigLift’s Happy D-type vessels have a pair of 400 tonne capacity cranes on board. The size of the tanks and their construction, plus the method of sea fastening, were all challenges. Co-operation between the tank builder and the BigLift project department resulted in an elegant solution to sea fasten the fragile, thin walled, storage tanks with clips, BigLift said.

In a two-day journey six of the tanks built by Sloot Tankbouw were shipped in a horizontal position on barges via the Dutch inland waterway system to Rotterdam. a journey of two days. The other seven tanks, built more locally, were also moved on a barge but in an upright position.

In the first week of February all 13 tanks were loaded on to Happy Delta. The six horizontal tanks were picked from the barge by two cranes in tandem, tilted up to vertical and positioned on board. Single lifts got the other tanks on board.

Happy Delta sailed to Jubail in three weeks, via the Bay of Biscay and the Suez Canal. All 13 tanks were then unloaded on to the quay of Jubail.