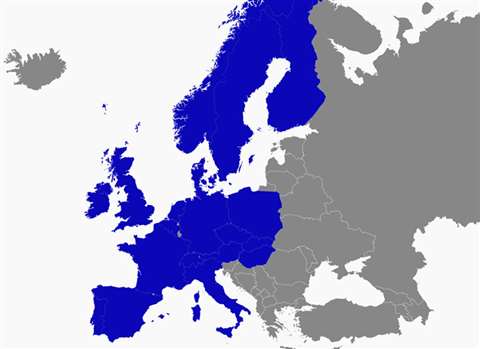 It is estimated that GDP (gross domestic product) will grow by 1.9% per annum for the 19 Euroconstruct countries in the three years from 2016 to 2018, a figure which is virtually unchanged from its December forecasts.

It added that 2015 had been the first time in eight years that all Euroconstruct countries had recorded an increase in GDP, and this was expected to continue over the next three years.

Speakers at the conference included Andrew Cates, chief Eurozone economist at the Royal Bank of Scotland, based in London, UK. He presented a European macroeconomic review and looked at the prospects for the industry.

Global levels would be slow in the months ahead, he said. China was “extremely difficult”.

He said the Eurozone was a difficult region with underlying problems to tackle.

He pointed to an ageing demographic, with reduced capacity to take on risk, and said that there would be increased demand on savings, which would result in downward pressure on interest levels.

He said this meant a low interest environment for the foreseeable future.

He added, though, that things were looking better in the Eurozone, with some capital investment growth. He said that the Eurozone growth would be slow.

Professor Roger Flanagan of the UK’s University of Reading spoke about Winning the Race to the Future in Construction, saying it had to be looked at in a global context, “because it is a global race”.

He described global construction as a roller-coaster.

“It seems that it dips deeper, faster, and comes out slower,” he said.

The Euroconstruct conference heard that growth in total construction output for both 2014 and 2015 had been revised downwards from the Budapest projections last December, as 2014 saw output increase by 1.1%, as opposed to 1.3%, while 2015 saw growth of 1.4% rather than 1.6%.

Overall construction output in 2016 was expected to improve by 2.6%, although this was said to be below the forecast outlined last December.

An unchanged growth forecast of 2.7% was estimated for 2017, followed by growth of 2.4% in 2018. Euroconstruct said this was an improvement on the forecast of 2% growth outlined in December.

The Central and Eastern European countries were expected to achieve the greatest gains from 2015 onwards. It said factors ranging from improving real household disposable income, low interest rates, and the European Commission’s Investment Plan for Europe were expected to contribute to the modest overall average growth in construction investment of 2.6% per annum over the coming year in the Euroconstruct area.

The overall value of the construction industry itself was estimated by Euroconstruct to be €1.406 billion in 2016. This equates to 9.4% of GDP and is significantly lower than the peak of 2007, where the industry accounted for 13% of GDP, it said.

Although it said that the Euroconstruct market did stabilise in 2015, it saw a diverse range of growth rates recorded across the 19 member countries during the year.

Strong output growth rates were noted in the Slovak Republic at 18.5%, the Netherlands with 7.8%, and the Czech Republic at 7.1%, while countries such as Austria, France and Switzerland contracted marginally in 2015.

When it came to assessing the performance of the main segments of the construction industry, it found that overall, the value of the residential market in the Euroconstruct area was €646 billion in 2015, with renovations accounting for 60% of the market.

The most significant factor affecting the Euroconstruct residential market, it said, was the inflow of refugees which had been increasing the pressure to provide housing across the Euroconstruct area – especially in Germany and Norway.

It said that by end of 2016, the level of housebuilding would have increased by 9.2% to 1.54 million dwellings since the lowest point in the cycle in 2013, with major contributions coming from Germany, the UK and Sweden.

In the non-residential segment, it reported that the volume of construction activity in Ireland was forecast to record exceptional growth in 2016 and 2017 after an absence of commercial building for several years.

Euroconstruct said EU funds in the period 2014 to 2020 would strongly influence developments in Hungary, while the sheer lack of capacity in Spain and the requirement to address emerging supply gaps were expected to spur construction activity.

Belgium, the Netherlands and Finland were each expected to record around 10% cumulative growth in the volume of output from non-residential projects.

With 14 of the 19 countries each expected to record a cumulative growth of 5% or higher in the 2016 to 2018 period, the overall outlook for the total non-residential market was described as being dragged down by Germany, which had 18% of the total market. In Germany, the volume of non-residential output was forecast to increase by just 1.5% in total over the same period.

Euroconstruct said that the civil engineering sector would have suffered in a number of countries as a result of austerity measures during the financial crisis. However, it said that after many years of contraction, civil engineering output had bottomed out in 2014, with a rise of 0.8%, and recorded a solid expansion in 2015 of 2.9% to reach €308 billion.

It said a number of factors were influencing the trajectory of civil engineering, including continued constraints on public investment levels and strict budget deficit rules set by Brussels, pre-election surges in investment levels in Spain, and more pressing expenditure requirements in Germany arising from the refugee crisis. It also cited a lack of funding at the level of local government and municipalities, and slow and often delayed starts to existing public funded programmes.

Looking at the overall construction output figures, Euroconstruct said that the 2.6% increase for 2016 was equivalent to an increase of €36.5 billion.

For 2016, the six largest construction markets – Germany, the UK, France, Italy, Spain and Poland – are expected to contribute almost three-quarters of this growth in the Euroconstruct market, which was said to highlight their importance to the market.

The smallest contributions for growth in 2016 were said to be expected from the Slovak Republic, Hungary, Austria and the Czech Republic. Between them, they were said to contribute only 2.2% of the total increase of €36.5 billion for 2016.

With the conference held in Dublin, Euroconstruct was able to say that Ireland’s construction industry was predicted to experience cumulative growth of 42.5% in the next three years, although it pointed out that this was from “an exceptionally low base”.

Annette Hughes, director of DKM Economic Consultants, told the conference, “If the European economy does well, then construction does well. There are risks, and construction needs sustainable growth.”