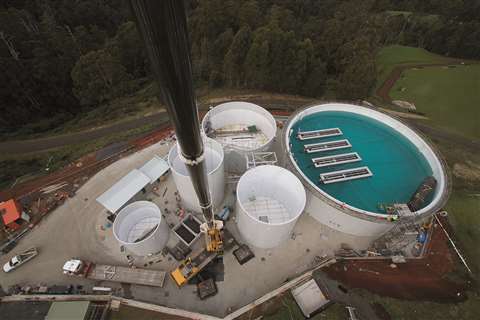 New Zealand-based contractor ADI was tasked with building a waste water treatment plant for a cheese making facility in Tasmania, Australia. The plant will treat the water that is used during the cheese making process to then be placed into the town’s sewer for further treatment.

Wheeled mobile cranes were chosen for this job because of the cramped site location at the back of the client’s existing property in Burnie between a neighbouring property and a rail easement.

The complex process of treating the water is ADI’s specialty, however, performing the construction works as a head contractor wasn’t - until this project. ADI sought the expertise of a local construction manager to help drive the construction as well as local crane company Billings Cranes for the lifting elements. The client also engaged Beca, operating in the Asia Pacific, to perform the project management services.

The AUS $20 million project was the first of its kind to be undertaken in Tasmania, the company said, and included construction of five large metal panel tanks with 12,500 metres cubed (m3) of storage, a dewatering building, boiler and associated flare.

The site, overall, was congested and often built itself out as construction progressed due to the width and height of the tanks. All manner of plant, pumps, pipework, structural steel and settlers had to be lifted in and around the five tanks that dominated the site. The large items to lift were four settlers, the tank roofs, the two separate pre-built parts of the stair tower and the boiler and flare.

Prior to the construction even commencing, lifting of the settlers into position was a risk to the project. During design, two options were considered for the main lift of the tank settlers to be placed within the 33.7 metre diameter main tank, the BVF. One option was to use a 400 tonne mobile crane that, due to the expected available access, would have an approximate 80 m lift over the edge of the tank structure, which itself is 8 m high.

Tasmania doesn’t have a crane of this size and therefore need to be shipped in from mainland Australia. The cost ruled this option out so Beca and ADI looked at the construction staging so that a smaller 160 tonne mobile crane could be used. This involved delaying parts of construction as well as having to lift components in position at a later date but allowed the smaller crane to be used. The company says.

Billings was able to provide technical advice on the lift and requirements of the crane including the spacing/loading of the outriggers. Designers were able to check that the pre-built concrete pad could support the largest, 160 tonne crane throughout the lifts. Billings was also able to confirm that it had suitable cranes to perform the lifts.

After significant planning the most complex lift was a success. The four 8 tonne settlers were all lifted into position within a single day.

A summary of the four key lifts during the project are:

1. The four settlers had to be lifted into the largest of the tanks. The details of the settlers lift include: 8 tonne load at 56 m boom with the use of a spreader bar due to the length of the settlers themselves (6 m). These were brought to site by a low loader and then lifted into position by Faun ATF160G mobile crane.

2. Lifting of the pre-fabricated 12 tonne stair tower. Again, ease of construction dictated that the stair tower was pre-fabricated off site and then brought on site. The final assembly occurred at the lay down area which was 100 m from the final position. It was brought down to the site via two articulated cranes (a 15 and 20 tonne Terex Franna). Once on site the stair tower was uprighted using the 160 tonne Faun crane and 20 tonne Terex Franna by top and tailing the tower. It was then lifted into positon over the already built tanks and placed on its footings.

3. Removal of the existing whey silo was a separate activity to that of the waste water treatment plant. This activity was directly managed by Beca. The 8.6 tonne whey silo was approximately 10 m in height. All pipework was removed and the initial seal that the tank had with the concrete footing was broken with steel wedges. The silo was lifted off using its existing lifting points with a 100 tonne Grove Crane. Once on the ground, the silo was top and tailed using the 100 tonne crane and a 15 tonne Terex Franna.

4. The final lifts were the two PVC tensioned fabric roofs that were delicate in that they are light and easily affected by the wind. Their installation also required a second crane to hoist the work box to allow them to be fixed and tensioned onto the tanks. This was undertaken by 160 tonne Faun and 40 tonne Tadano cranes. The roofs were lifted using the roofs own tension straps, which numbered 36 and 26 respectively. Each strap required careful placement onto the hook so they could be easily removed once the roof had been secured. The PVC roofs had to be placed accurately, much like a tent roof where a centre hole slips over a supporting pole.

Construction on the project commenced in February 2015 and completed in March 2016 with commissioning still ongoing for the next couple of months to allow testing of the system and graduation implementation of the full solution.