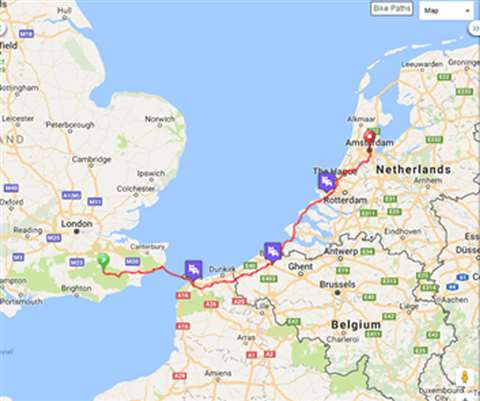 The Road To APEX route.

An intrepid team of cyclists will head out from the UK on a four-day charity ride at the end of April to the Amsterdam Rai Convention Centre in Amsterdam, the Netherlands, where APEX 2017 is taking place.

The Road To Apex team will set off from KHL Group headquarters in Wadhurst, UK, on Friday 28 April, and arrive at the convention centre on Monday 1 May - the day before APEX begins.

The 450km ride is sponsored by APEX organiser IPI and the show’s official supporter KHL Group. The team is raising money for the Lighthouse Club which provides financial and emotional support to people in the construction industry and their families who have suffered an injury or long term illness.

Anyone who would like to support the team by donating to the  Lighthouse Club, should visit the The Road To Apex’s JustGiving page.

Mike Pitt, owner of US-based Mastclimbers LLC and organiser of The Road To Apex, said there are still six places available on the ride – anyone who would like to take part can contact KHL.

Heading out from the KHL offices in East Sussex, The Road To Apex team will travel through the Kent countryside, then across the Channel to France and The Netherlands.

Heading for Folkstone, the team will wind through small villages and open farmland, before picking up the coastline and climbing the famous White Cliffs of Dover, before hopping on the first ferry of the trip across the Channel.

It's an early start from Calais, France, through the historic town of Dunkirk and along the iconic coastline. After 55km in France, the team crosses the border into Belgium and continues to hug the coastline, before heading inland towards the pretty capital of the Flanders region, Bruges.

Heading out of the medieval city and cobbled streets of Bruges, the ride follows the beautiful tree-lined canal-side cycle route to the border of the Netherlands. In the harbour town of Breskens, the team takes a short ferry ride to the coastal plains of the Zeeland province, before resting up for the night in Brielle.

On the final day in the Netherlands, the ride will pass by Rotterdam and The Hague, heading north to join the river Amstel which runs to the final destination and the Amsterdam Rai Convention Centre. Click here for the full route.

Taking part in the The Road To Apex so far are: Andy Pearson, Prolift Access; Charlie Patterson, Skyjack; Barry Donaghy and Kattherine Donaghy, both from Training4Stafety; Brian Parker, AFI-Uplift; Ian James, Bronto Skylift; T James, Niftylift; Kieron Pitt-Allen and Mike Pitt, from Mastclimbers. Contact Mike Pitt, or is here at KHL, if you wold like to join the group.

The APEX show, which is the world's largest exhibition dedicated to access equipment, takes place 2 to 4 May at the Amsterdam RAI exhibition centre, The Netherlands. Ninety-seven companies have booked space at the show, which is now completely sold-out.

Visitors can register in advance at the show website and avoid paying the €20 fee at the entrance. The webiste also includes a ‘virtual floorplan’, allowing visitors to view the equipment that each exhibitor will show and also to request appointments.