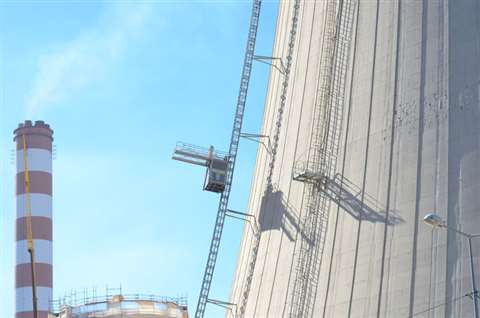 Geda is participating in the multi-million Euro construction of two towers at the Opole coal-fired power station in Poland.

The expansion of the power station in Opole in the south of Poland started in 2014, with blocks Number 5 and Number 6, each with a capacity of 900 MW. The investor is Polska Grupa Energetyczna (PGE) which estimates the project value to be €2.8 billion.

From transport platforms to personnel and material hoists and suspended working platforms, a large part of Geda’s product range has been put to use in Opole.

The two new cooling towers are a major part of the expansion. To assemble the external sheathing and to enable workers and building materials to access the formwork, a Geda PH 2032 650 Single personnel and material lift were installed on each tower.

The particular geometry of the towers, over 185m high, created huge challenges for the lift assembly. Due to the incline of the facades, both the mast and the lift itself had to be adapted to the towers. Therefore, the Geda PH was equipped with two shiftable assembly planks which enables the mast to be anchored to the changing geometry.

The exit to the formwork from the lift via an additional ‘D’ door was also a customised solution developed by Geda. Thanks to two power packs, each with a load capacity of 2000kg or 25 people, a lifting height of 400m and a hoisting speed of up to 90m/min, speed of work was also ensured.

Four sets of Geda AB 650 suspended platforms have also been installed on the towers, each with a platform length of 6m to 9m and an assembly height of about 190m. The same number of suspended platforms are also being used internally to apply a special chemical coating. The exterior walls will subsequently be decorated with a large-scale mural.

A further customised solution was developed for Opole. To balance out the incline on the suspended working platforms assembled on the external facade, Geda developed in-house an innovative press-in frame with a third winch to achieve the press-in effect. This enabled Geda to offer a technologically sophisticated yet cost-saving solution.

The components of the GEDA suspended working platforms are very light and can be transported by one person which also makes the assembled platform easier to move.

Heavy-duty cranes from rental company Sarens are also being used on the construction site. The cranes are each equipped with a Geda 2 PK crane operator hoist.

It is designed to transport two people safely and quickly, with a load capacity of 200kg. Therefore, any materials required for maintenance tasks can also be transported. With a hoisting speed of 25 m/min, the lift transports the crane driver upwards to a height of 150m. Higher lifting heights are possible on request.

Geda Multilift P12 personnel and material hoists are being used to build Blocks 5 and 6. Authorised for the transportation of 12 people or 1500kg to a lifting height of 150m and a hoisting speed of 12-40 m/min, it is comprised of a car, enclosure, flat cable bin and drive is delivered as one unit and designed for container loading and for HGV transportation.

A Geda 1200 Z/ZP transport platform is also supporting the construction. People can also be transported along with materials. With a load capacity of up to 1500kg and a maximum of seven people and a hoisting speed of 12 or 24 m/min, the single-mast.

When the expansion of the Opole power station is completed in 2019, it will be one of the most modern coal-fired power stations in the world.