The year 1967 is fondly remembered by millions of people for a range of reasons – the release of Sergeant Pepper, the summer of love, and the launch of a dedicated pop music radio station by the BBC to name but a few.

Demolition industry milestones of that era are less easily brought to mind, but in one part of south east England September 2017 marks an anniversary for one company that has a significance all of its own. The Erith group has been in business for 50 years. 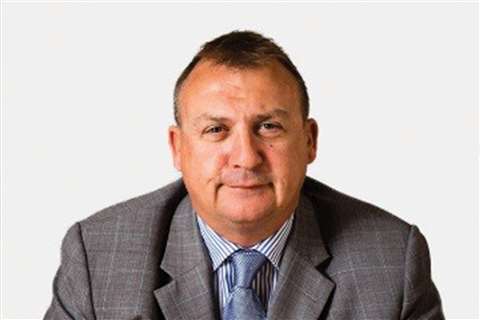 Erith Contractors managing director David Darsey – himself with a career at Erith spanning 30 years – takes up the story of how the company was formed.

“It started out primarily as a haulage business, with one lorry.

“My father, Thomas Darsey, was a lighterman on the river [Thames] until he was made redundant.

“My mum was on the phone taking orders for the business while making alterations to curtains.

“September 1967 was when it became a limited company – my father had started out as a sole trader. Since then we’ve gone from being a supplier to creating our own work, and the contractors business is the biggest part of the group. In fact we’ve evolved to being one of the biggest demolition contractors in the world.”

Fast forwarding half a century reveals a company that has indeed grown, and continues to do so. It’s turnover in 2016 was more than £150 million (US$200 million), and the pre-tax profit that generated, of £10 million ($13.4 million) was a record for the business.

It’s still a family firm as well, David’s brothers Steve as chairman and Tony running the asbestos and nuclear side of things.

“With sub-contractors, that’s around 1000 people. The market is still buoyant and we are still busy. The turnover and the margins will be smaller this year, but we are aiming to maintain where we are.”

Where Erith is, in fact, is in a top-three position in the most recent D&Ri100 table of global demolition contractors, ahead of all except one of its countrymen, and about to contest five categories at the forthcoming World Demolition Awards. It also has several high profile contracts under its belt. 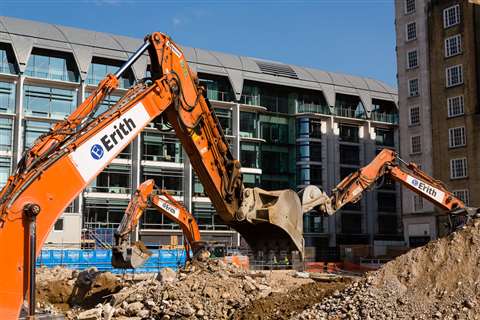 An Erith project at Marble Arch Place in London

Perhaps inevitably, given its geographical location, London has been the site of a number of these projects.

But David is keen to point out that the company works in other places too.

“We do a lot in central London, for blue chip developers, and also inside the M25 and in the home counties.

“We also work in the US, Sweden, France, Russia, Germany and Cyprus, as well as other parts of the UK. We will go where we are expected to go for existing clients.

“The projects we tend to go for are the more technically challenging, complex engineering ones. With the services we have we can offer value engineering, we can come up with solutions for a client’s budgeted programme, but we are geared up for big jobs.

“London is often about retaining facades, it’s good that London’s heritage is kept, you can put a Grade A office behind a 100-year-old frontage. As for international demolition jobs, the more complex they are the more I feel we have a good understanding of the structure. Every one you do is different.”

President of the Institute

“One thing I am championing is that when the client is choosing a contractor at the PQQ (pre-qualifying questionnaire) stage, it should be a front end question whether the contractor is a member of the NFDC.

“Contractors should have at least two full IDE members that will be involved in the planning and execution of the contract. That way, the client gets better than best practice. You wouldn’t get a boiler or an electrical system without a registered contractor, so why should it be any different with demolition?”

Another important role for the IDE during David’s presidency has been the development of future generations of demolition industry employees.

One example is the creation of the UK’s first degree qualification in demolition, where the institute worked closely with Wolverhampton University and senior industry figures Terry Quarmby, Mick Ulyatt and John Woodward to make the course a reality. David was involved in writing the guidance notes and having seen the academic side of demolition industry at first hand he is convinced the degree qualification is filling a much needed gap.

“Membership of the institute is growing,” he said.

“We have signed up about 25 new members this year, with the same number going from enrolled member to full member. We have 30 set to take the exam in November.

“I’m impressed by the standard. I’m one of the markers of the exams and the calibre of papers we are getting now is a lot more technical and detailed than when I started marking them six years ago.”

Back at Erith, David also stresses the importance of its people, whether in terms of the tools they are given for the job –none of its items of plant and equipment are more than three years old and those that become so are replaced on a rolling investment programme – or their welfare as individuals.

“We have exemplary health and safety, we opened our own training centre and put 1,100 men through Fit for Work. It was me who brought in the site audit scheme. I wanted to bring in occupational health. At the time it was deemed a step too far but now it is part of it.

“There are a lot of hardened men in demolition – they don’t like to be seen visiting the doctor with a runny nose. To see a nurse on site takes a huge pressure off them. It means we can find things like high blood pressure, diabetes and hearing problems, things that need long-term treatment, and give people a longer working life. I go round the sites once a month. I call it a health and safety tour.”

“I’m very proud of the business. The employees are proud of it. Staff retention is very important to us and a large proportion of them a long serving – we have some people who have been here for 40 years and certainly a lot of people between 20 and 30 years. I tell my staff that my door is always open, whether it’s personal or business. It’s a cliché but we are a family business – and everyone is part of an extended family.”