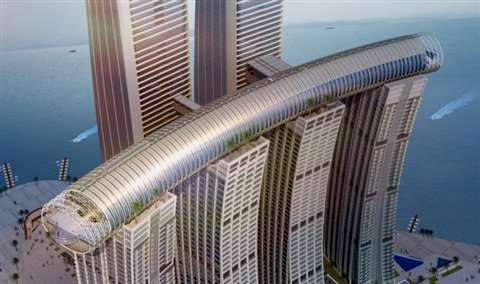 Singapore-based real estate company CapitaLand has begun to erect a record-breaking sky bridge as part of the RMB24 billion (US$3.8 billion) Raffles City Chongqing urban district being developed on the Chaotianmen riverside in the Chinese city of Chongqing.

At 400m above sea level, it was said that the sky bridge – known as the Conservatory – would be the highest in the world. It will also link the greatest number of towers, spanning four 250m-tall skyscrapers and connecting to two other adjacent towers via cantilever bridges.

The curved accordion-shaped ‘horizontal skyscraper’ will measure 300m in length – taller than Singapore’s tallest building laid on its side – 30m in width and 22.5m in height.

“Some of the world’s most advanced construction and engineering techniques have been deployed to install this megastructure on Chaotianmen.”

The Conservatory is made up of a continuous steel structure weighing almost 11,000 tonnes, and enclosed with a ring comprising 3,200 pieces of glass and 4,800 aluminium panels.

To erect it, the steel structure has first been divided into nine segments – four segments that are built in-situ above the four towers, three middle segments suspended between the four towers that will be pre-fabricated on the ground and hoisted into place by hydraulic strand jacks, and two cantilever segments that will be assembled in short sections from the two ends of the rightmost and leftmost towers.

Hoisting the three middle sections – each weighing up to 1,000 tonnes – to the designed height of 250m was said to mark a world-first.

The Conservatory’s steel structure is scheduled to be fully erected by the middle of 2018, and it will be followed by the hoisting of the façade enclosure together with large trees and plants for the sky gardens.

In addition to sky gardens, the Conservatory’s 10,000m2 floor area will have an infinity pool, a food and beverage zone, and an observation deck with an outdoor patio that has transparent glass flooring.

To overcome the site’s exposure to strong winds, a wind-modelling test was conducted on the Conservatory, as well as the eight towers that will be in the Raffles City Chongqing urban district.

Building information modelling (BIM) technology was used to coordinate the complex structural and utilities layout of the Conservatory.

The support system for the structure uses advanced frictional pendulum bearings and seismic dampers mounted on the towers. This form of flexibility-driven seismic design was said to dissipate seismic and wind energy more effectively than the conventional rigidity-driven design.

The Raffles City Chongqing urban district broke ground in September 2012 and since then five of the eight planned towers have successfully topped out. Included among them is a 350m-tall skyscraper that holds the record for China’s tallest residential tower and Chongqing’s tallest building.

Covering an area of 9.2ha, the new urban district will have a total constructed floor space of 1.12 million square metres. This will include 160,000m2 of office space, a 230,000m2 shopping mall, and 1,400 residential apartments.

Located on the Chaotianmen riverfront at the confluence of the Yangtze and Jialing rivers in Yuzhong District, next to the traditional Jie Fang Bei central business district, the urban district will be fully integrated with a transport hub that includes a metro station, a bus interchange, a ferry terminal and a cruise centre.

Ming Yan said, “Our goal is to create a vibrant riverfront urban district that serves as a dynamic city gateway befitting of Chongqing’s growing economic influence.”

The entire development is planned to open in phases from 2019.