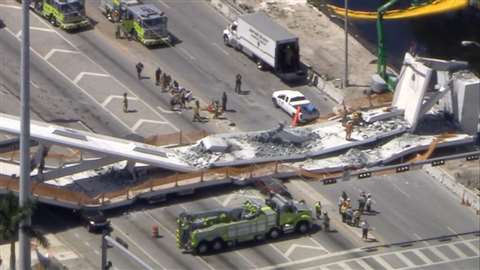 The bridge had only recently been installed

A recently installed pedestrian bridge in Florida, US, has collapsed onto a highway resulting in the deaths of at least six people.

The bridge – which is 53m long and weighed 950 tonnes – fell directly onto the highway, crushing cars beneath it.

The structure was built by Miami Construction Management and was only recently installed in a single morning over the eight-lane highway.

MCM built the bridge by using a method called Accelerated Bridge Construction, in which the bridge was built on-site but to the side of the street to make the process faster and safer.

Once the bridge was built it was lifted with heavy machinery and placed on top of support beams over the street.

The bridge was to provide a walkway over one of the busiest roads in Florida and was located by Florida International University.

The US$14.2m project was funded by the US Department of Transportation and was supposed to last for more than a 100 years.

There are reports that construction workers were working on the bridge at the time of its collapse, possibly conducting a stress test.

Florida’s governor, Rick Scott, has confirmed that an investigation will take place to hold anyone responsible accountable.