MEWPs owned by rental company Aria Aerial Platforms played an important role in the inauguration of a 34ft high statue of Shrimad Rajchandra in Dharampur, a small village in the State of Gujarat, India.

Shrimad Rajchandra was a Jain poet, philosopher, scholar and reformer. Born in 1867, he was prodigy and claimed to have recollection of his past lives. Last year marked the 150th anniversary of his birth.

The grand ceremony, which took place in November last year, involved using three boom lifts: a JLG 1350 SJP, JLG 120 SXJ and a Genie S125 to spray water, in five different colours, over the top of the statue, and to drop petals. The occasion saw more than 50 people from the local area lifted by the booms to carry out these tasks.

Shrimad Rajchandra Mission was the organiser of the event and wanted to ensure the view of the ceremony, witnessed by a large crowd, would not be hindered. Therefore, it was decided a scaffolding solution would take up too much space and inhibit the proceedings. 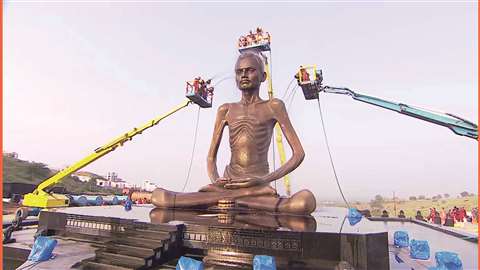 Aerial platforms are still a novelty to many people in India. As Dharak Dedhia, director of Aria explains, “We showed the management committee many videos of these machines and we took them to our and gave them a trial. We had to explain to them about the safety features and stability of these machines.

“The vertical height was about 40ft and horizontal reach was around 50ft, hence we needed minimum 120ft machines. Transporting them to the location was a separate challenge.” I addition, the statue is placed in the centre of a small body of water, which the booms had to reach over.

Concrete was laid around the statue ensure the ground was stable and everyone using the lifts wore harnesses to comply with best practice.

The water used in the ceremony was pumped from a single tanker through pipes used by the people in the basket.