Future is orange for Trevi Benne

Italian equipment manufacturer Trevi Benne will be at Intermat later this month with its Impact Booster, a hydraulic valve installed on the cylinder that multiplies the pressure the pressure provided by the excavator by up to three times. 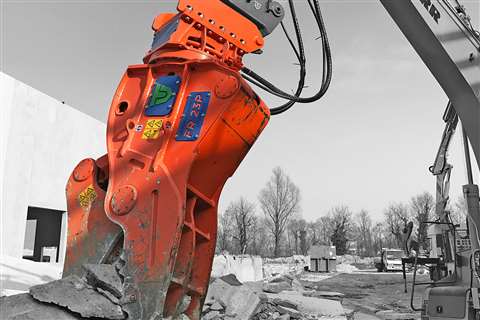 The company’s exhibit will feature three demolition models from its Premium range equipped with the booster valve. They will be shown under the banner “The Orange Power”, reflecting the colour of the new products.

Trevi Benne said that thanks to the new product developments, combined with the higher pulverising strength developed by the Booster, performance increases for an average of 20%.

As well as being more powerful by definition, it is also faster in the opening/closing cycle time, which means increased daily efficiency.

This new device has been applied to the demolition series from 1.5 to 3.5 t, the MK series, the HC primary crusher, the F stationary puliveriser and the FR rotating pulveriser.

As well as the demolition units, a total of 12 other items of equipment from the Trevi Benne range will be on show at Intermat.