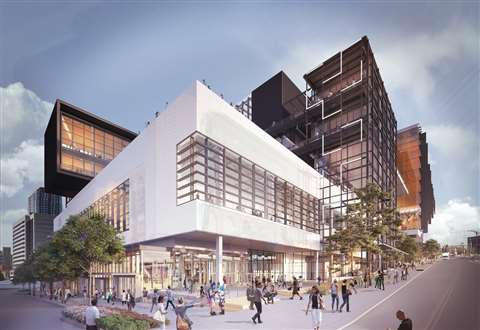 A rendering of the Washington State Convention Center expansion, from LMN Architects

Plans worth US$1.6 billion to extend the Washington State Convention Centre (WSCC) in Seattle, US, have been given the go-ahead.

Set to be the largest development in downtown Seattle’s history, it will transform the equivalent of three blocks of mixed commercial zone land located in the city’s core.

Funded primarily by a bond issuance from WSCC supported by the existing tax on hotel rooms, the project will add approximately 23,700m2 of exhibition space, 11,600m2 of meeting rooms, and 5,500m2 of ballroom space to the current convention centre’s capacity, spread across several levels of modular, multi-functional space.

The design of the WSCC addition was said to prioritise efficiency, connections with the surrounding neighbourhoods, and open and engaging public spaces.

It will integrate mixed-use developments to enrich the urban diversity of the site, and in support of the local community $38 million will be spent on affordable housing, $26 million will be put towards improving pedestrian and bicycle paths, and $10 million will go towards enhancing the nearby Freeway Park.

Estimates suggest that up to 6,000 jobs will be created during construction, and it has been agreed that at least 8% of subcontracted businesses will be owned by women or minorities, and that 19% of workers hired will come from disadvantaged areas.