The new crawler is the 800 tonne capacity LR 1800-1.0. The crane is three metres wide and has a maximum transport weight of 45 tonnes once its tracks have been removed. In standard configuration the crane has an 84 metre luffing jib and an 84 metre boom, which comprises three lattice sections that can be telescoped for transport. See the all terrain cranes feature in the July issue of ICST for more details.

The new all terrain crane is the LTM 1230-5.1, which succeeds the LTM 1200-5.1. It has a longer boom and greater lifting capacity than its predecessor. The 75 metre telescopic boom is 3 metres longer, while its lifting capacity has increased by an average of 20 percent, taking it to 230 tonnes. With lattice extensions the maximum hook height has been increased by ten metres to 111 metres. In addition to a multi-functional folding jib, a 43 m fixed jib is also available. Full details of the new LTM 1230-5.1 will be published in next month’s all terrain crane feature. 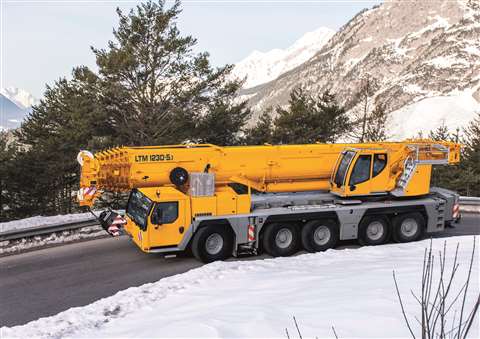