Riwal has celebrated its 50th anniversary with a conference and lavish evening ceremony in its hometown of Rotterdam, the Netherlands.

The access rental giant also took the opportunity to launch the world’s biggest electric-powered boom during the event. The 43m machine is a converted JLG 1350SJP and is capable of working for five hours from full charge with its Led batteries. The first unit has been sold to Steiness Liftcenter, based in Denmark. 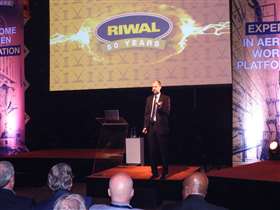 The 50th anniversary conference was designed to look into the future of MEWP rental, as well as sharing the story behind Riwal’s lean business process, the Riwal Way, which has been introduced across the company. 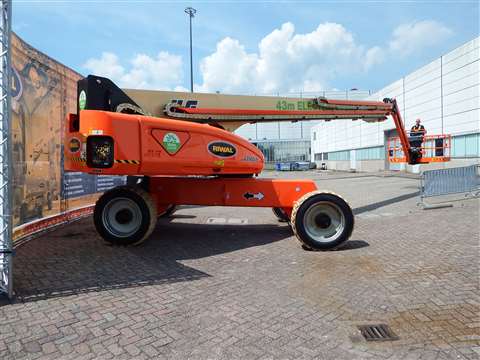 Guru Bandekar, VP global engineering & programme management at JLG Industries showed how technology will result in even safer and more efficient equipment. Jeremy White, executive editor at Wired Magazine then provided a fascinating view of how artificial intelligence (AI) is shaping all our futures.

JLG, Riwal’s main supplier, was a co-organiser of the event. Frank Nerenhausen, JLG president presented a 3D-printed model of a JLG boom to Riwal to mark the  longstanding relationship between the two companies.

The celebration evening party followed at the historic Hulstkampgebouw Rotterdam.

Find out more about Riwal’s plans for the future in AI’s exclusive interview with Norty Turner in the June-July 2018 issue of the magazine, publishing soon.