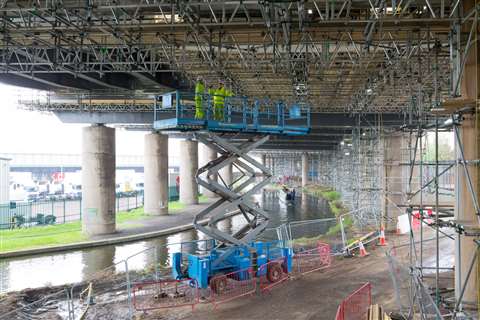 BMV (BAM Nuttall, Morgan Sindall and VolkerFitzpatrick) has used the VR technology from Nationwide Platforms to boost the safety of road workers repairing the viaduct, 5m above the ground and beneath the viaduct deck.

As work on the Highways England scheme enters its next phase, workers are replacing 2.3km of drainage under the viaduct along with the formwork/shuttering required for concrete repairs, with around 6,000 repairs carried out so far.

In addition to supplying MEWPs, Nationwide Platforms has supplied the M5 Oldbury team with the first VR simulators in the UK: these realistically mimic the sensation of operating boom and scissor lifts, allowing operators to improve their skills before they head out onto site. This is the first major project of its kind to use the breakthrough VR technology in this way.

The VR training started on the project on 16 April and the team has trained a total of 33 IPAF-qualified operators and a further 10 staff from BMV. Furthermore, 17 senior Highways England staff familiarised themselves with MEWP operations via the VR training. Through 32 different training scenarios, the VR technology allows qualified operators to upskill their familiarisation with MEWPs and refine their skills in a safe environment where there is no risk to themselves, others or the infrastructure, with immediate feedback on the assessment. 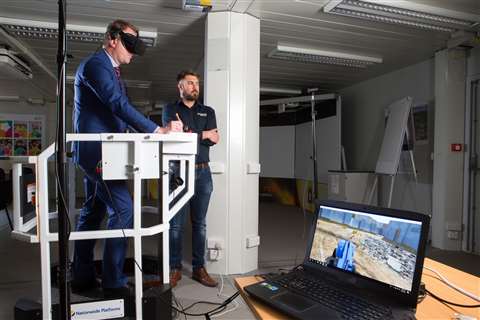 Each VR simulator unit comprises a replica platform basket and control panel, like those used on the real platforms, as well as a full-motion-tracking VR headset.

BMV JV project director Nigel Fullam said, “The use of this new technology aligns with one of our key project values – ‘Working Safely Together’. We are delighted to be the first major Highways England project in the UK to use this training. The collaboration shown by the whole project team to bring this training to the M5 demonstrates our commitment to continued improvement and challenging the status quo of traditional plant training.”

Highways England senior project manager Zbigniew Twarowski, said, “A lot of the activity on the project takes place underneath the viaduct. Our teams are working as hard as they can to get the repair work completed as quickly as possible, but it is essential that this is done safely.”

Peter Douglas, Nationwide Platforms operations director, added, “We have a strong relationship with the BMV JV and safety is a key focus for both parties. We’re delighted they are the first to use the VR technology, which perfectly bridges the gap between theory and practical training. The ability for operators to make mistakes in a safe and controlled environment not only prepares them for how to react to danger, but also provides them with valuable experience that we feel will reduce the number of potential accidents on site, as well as damage to buildings and equipment.”