The art of the possible

There are few demolition projects that provoke so much emotion in so many people as those involving a football stadium. The KV Mechelen club in Belgium, which has been in the country’s first division since 2010, has been going through that very process. Construction started in 2015 on the same site as the old ground, with Van Loo Projects in charge of demolition.

“Because we could only work between football seasons, it took three years,” said Johan van Loo, who co-owns the company with his father, Jef. 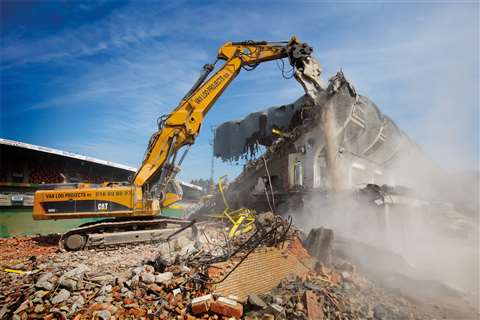 For this project, Van Loo Projects used a Cat 385 excavator equipped with the latest multi-processor. The new MP300 Cat multi-processors can handle any demolition job by using the basic housing together with a choice of six jaw sets. The operator can change the jaw sets in under 10 minutes without any specialised tools. Even wear parts can be changed in the field without sending the jaw to the workshop for surface welding. This new generation of multi-processors uses patent pending booster and speed valve technology and a patent pending jaw locking system, which translates to lower costs for customers and lower emissions for the environment.

For Jef van Loo, this kind of innovation and attention to detail has had an impact on efficiencies in the AFAS Stadion project.

“Our Cat multi-processor plays a big role in helping us get our work done. It takes a lot of time to demolish this type of concrete construction and to crush the concrete. The multi-processor is about 30% more efficient than other tools, saving us two to three days.”

This has been one of the most rewarding projects the company has even undertaken.

“Replacing the stadium has a large emotional impact on the supporters of KV Mechelen. It gives us a sense of great pride to be part of the tradition and the rebirth of such a special place.”

A recent challenge facing Netherlands-based contractor LEK Sloopwerken was to demolish three 150 m (492 ft) long viaducts on the country’s A27 motorway during a single weekend.

The widening of the A27 and A1 motorways between Eemnes and Bunschoten-Spakenburg is a huge infrastructure project. On the Utrecht to Almere stretch of the A27 alone it involves the heavy demolition of six old viaducts and their foundations.

To minimise traffic disruption, the contractor was given a window of 48 hours to demolish three of the bridges located near Hilversum and Bilthoven, an urban area with restrictions on noise and dust creation. Each bridge is 6 m (20 ft) high, and altogether the demolition work involved breaking 5,000 cu m (176,000 cu ft) of specially reinforced concrete.

The job was completed successfully within the timeframe using nine Epiroc rig mounted heavy hydraulic breakers with service weights of 3 to 7 t.

Epiroc heavy hydraulic breakers feature the patented IPS, which combines the AutoControl and StartSelect functions, and automatically adapts the breaker’s operating behaviour to any working condition.

IPS permits more accurate and significantly faster positioning of the hydraulic breaker, thanks to the centring effect, and avoids blank firing that often results in tool damage. Epiroc said that uptime is higher as with IPS no operator intervention is required and there is no interruption of the working process.

The versatility of JCB’s Hydradig has landed the machine a role in a demolition application in the United Kingdom.

Purchased by French Contractors – based in Rugby in the English midlands and which is carrying out the project on behalf of Jackson Civil Engineering – the Hydradig 110W model is being used to assist in the strengthening and rebuilding of the Swanswell Viaduct on the ring road in the nearby city of Coventry.

It is maximising an array of attachments including a Powertilt tilting hitch, a full range of buckets and a set of pallet forks. It has also been equipped with a Northerntrack hydraulic concrete pulveriser to undertake the surgical removal of the bridge abutments.

Supplied by dealer Watling JCB, the JCB Hydradig has been in demand on the project because of its high mobility, all-wheel-steering, hydrostatic drivetrain and maximum road speed of 40 km/h.

Working in the tight confines of lane closures, the compact dimensions of the JCB Hydradig come to the fore. Thanks to the TAB boom and a rear over-hang of just 120 mm (just under 5 in) it can squeeze into the tight locations to remove the abutments and parapet walls with ease.

“The JCB Hydradig bolsters our fleet and brings a versatile dimension to operations – whether that be through mobility, excavating, materials handling or proving hugely capable in a demolition application too. Its manoeuvrability and visibility are also very helpful on confined jobs such as this one,” said French Contractors partner David French.

Operator Ian Ellery added: “The stable machine handles the pulveriser exceptionally well. We would have had to use a larger wheeled excavator if the Hydradig wasn’t available to us. This would have meant a larger attachment, occupying more of the road and additional closures necessary.

“The JCB Hydradig has made this job far easier for everyone.”

Powered by a JCB Ecomax 444 diesel engine, the 11.5 t machine can easily rotate its upper structure within a single highway lane. The machine’s all-wheel steer chassis provides a compact turning radius of less than 4 m (13 ft) and the Hydradig can travel at up to 40 km/h where permitted, for rapid relocation on site.

United Kingdom-based contractor Collins Demolition has acquired two Volvo EC700 excavators equipped with the OilQuick automatic quick coupler system. The machines are currently working at the Hams Hall site in Birmingham. This is home to the former Hams Hall power station, built in the 1920s. The final stage was completed in 1958 and once boasted 13 cooling towers. Collins has the contract to complete the ground remediation. 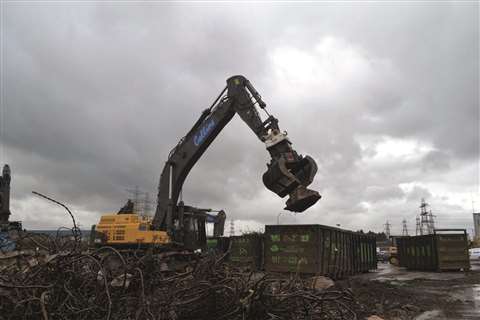 Collins Demolition director Scott Craddock said: “The two machines have been a brilliant addition to the demolition fleet.

“Having OilQuick fitted to the excavators improves health and safety for our operators and site personnel, machine productivity is increased, and downtime suffered by operators having to make a manual attachment has now become a thing of the past. I will definitely be looking into converting the remainder of the demolition fleet to OilQuick in the future”.

A longer version of this article appears in the July-August 2018 issue of Demolition & Recycling International. To see the full article, or to receive the magazine on a regular basis, please visit www.khl.com/subscriptions 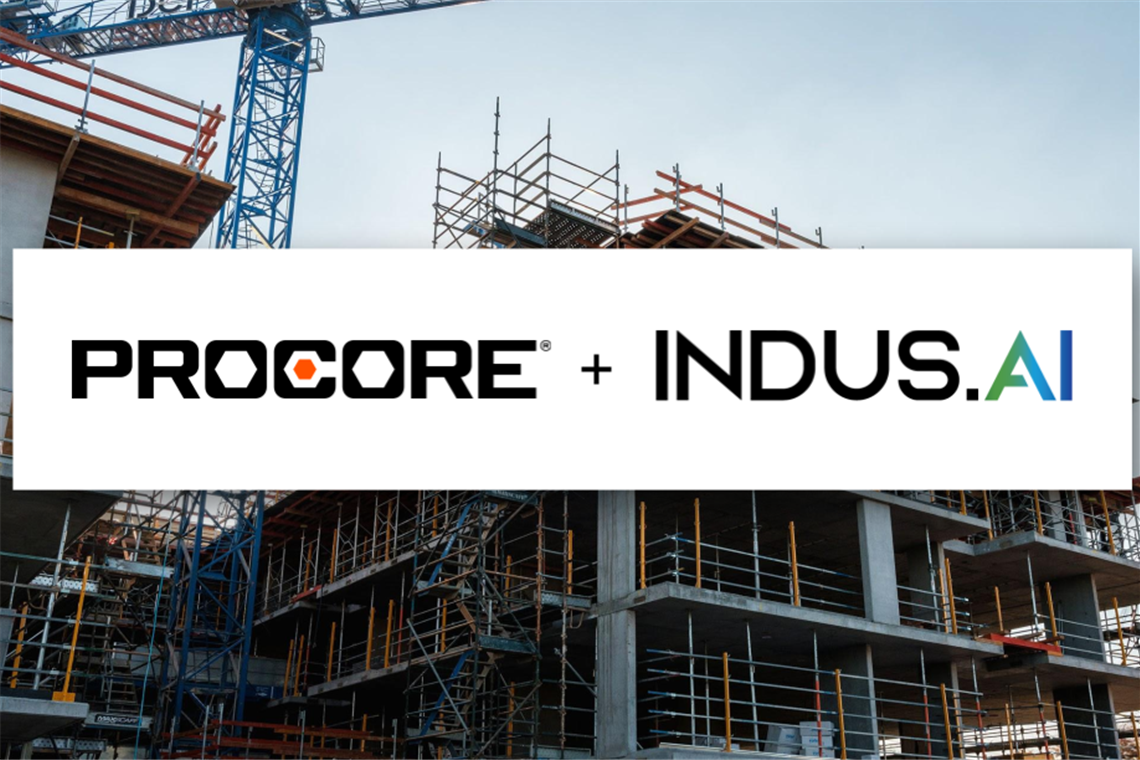