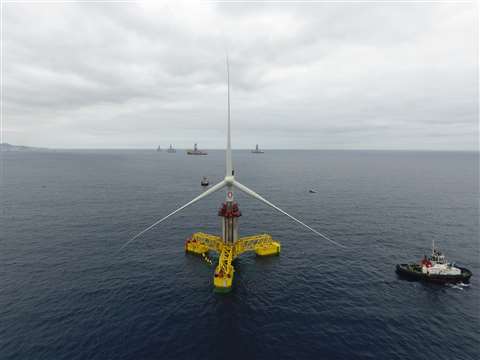 A different approach to turbine installation has been taken on a new telescopic turbine tower project in Europe. The first self-installing telescopic offshore 5 MW wind turbine has been installed in the Canary Islands off the Spanish coast. Claimed as a world first, it is part of the H2020 ELICAN project led by ESTEYCO, where UK-based international heavy lift and transport specialist ALE is part of the consortium.

The concept uses a self-floating gravity-based structure (GBS) and a self-lifting telescopic tower, both made of concrete. It can be assembled onshore, with the turbine, and then towed to site. ALE completed the tower lifting operations, the coupling and the offshore installation. Money is saved because “it does not need large, costly offshore equipment for its installation, thus reducing the overall installation cost (about 30%), ALE says.