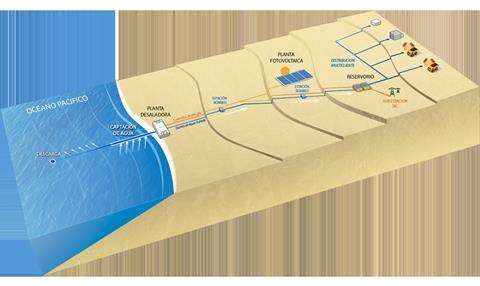 Schematic showing the planned layout of the new desalination plant

A project to build the largest seawater desalination plant in Latin America has been approved by the Chilean Environmental Assessment Commission.

The plant will be constructed in the Atacama region of northern Chile at a cost of about US$500 million and it will have the capacity to process up to 2,630 litres of water per second. It will also have its own source of solar energy (100MW), a substation and a 600,000m3-capacity water reservoir.

Enapac was created by Chile’s Trends Industrial to manage the project in partnership with Spain-based Almar Water Solutions.

In a statement, Trends Industrial said, “The Enapac project will be one of the most advanced in the world, with a combination of reverse osmosis desalination and photovoltaics.”

Rodrigo Silva, CEO of Trends Industrial, added, “Our vision is that many users will have access to a sustainable water source so that they will not use the continental waters and basins in the region, which suffer from severe water stress.”

The project has been nominated for the INDEX: Design to Improve Life Award 2019, also known as the Nobel Design Award, sponsored by the Danish Crown, as well as for the Aladyr 2018 award of the Latin American Water Desalination and Reuse Association, in the Best Desalination Project category.