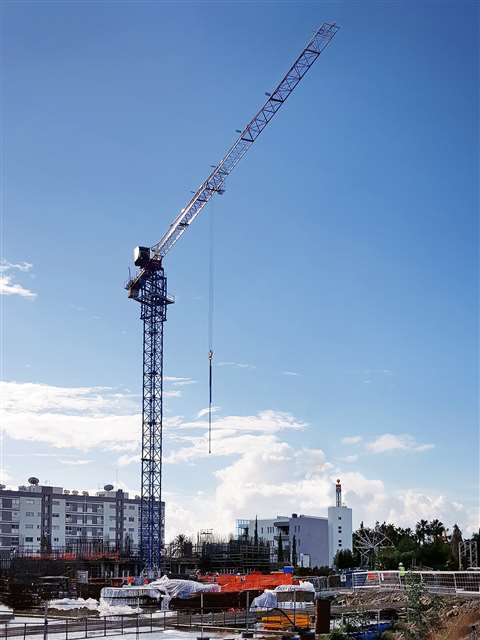 One of two Raimondi MRT111 cranes erected in Cyprus

Manufacturer Raimondi Cranes in Italy announced the appointment of ConAgro on 17 December. The cranes sold is a trio of Raimondi MRT111 flat top tower cranes.

Commenting on the news Mauro Masetti, Raimondi Cranes chief commercial officer, said, “ConAgro is well known in the European construction market for its professionalism and competence, specifically with its comprehensive heavy machinery servicing and after sales care programmes.”

Raimondi’s European manufacturing techniques, design engineering, and material source trail were all important to ConAgro, Masetti said. Founded in 1986, ConAgro is the largest importer of construction, agricultural and specialized equipment in Cyprus. It is based in Nicosia and has an office in Limassol.

Petros Rouvas, ConAgro chief executive officer, said, “ConAgro is pleased to commence our agency appointment with the sale of three Raimondi tower cranes. As a full line provider of construction machinery, we have anticipated the demand for tower cranes in Cyprus due to its economic recovery and the subsequent growth of the local construction sector.”

Two of the new Raimondi cranes were already at work, having been sold to AMIC Contractors, a consortium building the Limassol Del Mar waterfront development. The third unit was sold to Atlas Pantou-MAN Enterprise for that joint venture’s contracting work. It will be erected at the Skytower Residence on the eastern side of Limassol.