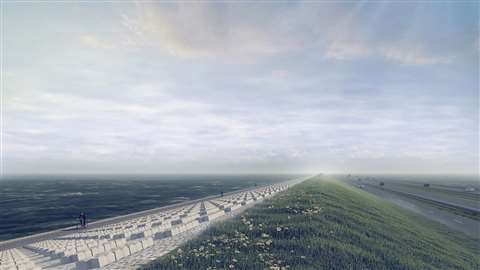 A contract for part of the renovation of the Afsluitdijk, one of the Netherlands’ key sea defence infrastructure projects, has been awarded to LafargeHolcim.

The total construction cost for the project which is said to be among the largest infrastructure upgrades in the Netherlands, is put at around €550 million.

The LafargeHolcim contract is for a new specially-developed solution protecting dykes against strong waves and rising sea water levels.

The new Holcim Basalton Quattroblock will cover around 700,000m2 of the 32km long dam. In addition, LafargeHolcim said it had developed a sustainable and efficient logistics solution where materials were delivered by sea to avoid additional traffic on the dam.

LafargeHolcim added that to ensure timely and seamless execution, it was also investing in the expansion of its Dutch concrete products plant that is part of its Solutions & Products segment.

When completed this year, the expanded plant will be able to produce 1,000 tonnes of concrete Quattroblocks a day for customers in the Netherlands, Belgium and Germany.

LafargeHolcim said it had more than 40 years of experience in providing sea defence solutions in the Netherlands and the investment would allow the company to grow this business further.

Marcel Cobuz, region head Europe, said, “As part of our Strategy 2022 – Building for Growth, we have committed to growing the new Solutions & Products segment further.

“We are very proud to be a partner in this landmark project that underlines our world-class capabilities in supporting challenging infrastructure projects. With sea levels expected to rise further, we are offering solutions that contribute to protecting particularly vulnerable landscapes such as the Netherlands.”

The Afsluitdijk project is expected to be completed in 2023.

Since 1932, the dyke has protected large parts of the Netherlands against flooding from the Wadden Sea, part of the North Sea. After more than 85 years, the dyke is in need of renewal and will be significantly reinforced.

Its specifications are designed so that eventually it will be able to withstand a storm that could occur once in 10,000 years and will also provide protection against rising sea water levels.

Rijkswaterstaat, part of the Dutch Ministry of Infrastructure & Water Management, has commissioned the strengthening of the dyke, increasing the discharge capacity and building pumps to transport more water to the Wadden Sea.

The LafargeHolcim solution will be used on the slope of the dyke and dams. The company claimed that extensive tests had shown that the new Quattroblock was 40% more stable than the previous Basalton columns. As a result, a relatively low column height could be used in the design of the Afsluitdijk, which was said to have major advantages in terms of durability, costs and practicability, among other things.