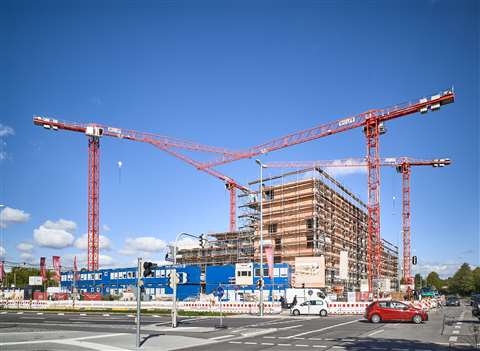 Wolff towers on the Kulturquadrat project in Munich, Germany

Bavaria’s capital Munich in Germany is a popular city and is undergoing major expansion.

On one project in the south east of Munich four Wolff tower cranes are helping to build the new urban centre of Neuperlach. They are helping to construct the new residential complex Loge No. 1, part of the mixed used Kulturquadrat project.

Contractor Bau in Form is using top slewing Wolff cranes to build a condominium in amongst other buildings and open areas. They are 6031.8 and 6031.12 models with capacities of 8.5 and 12 tonnes, respectively. Their jibs are 50 metres and they are erected free standing. Work for both towers is primarily lifting formwork and prefabricated concrete elements in an urban setting.

Maximum hoisting speeds are 115 m/min and 170 m/min to help accelerate progress. To ensure sufficient stability of the freestanding cranes, they were set up on 5.1 and 6.5 m cross frames with ballast up to 70 tonnes. 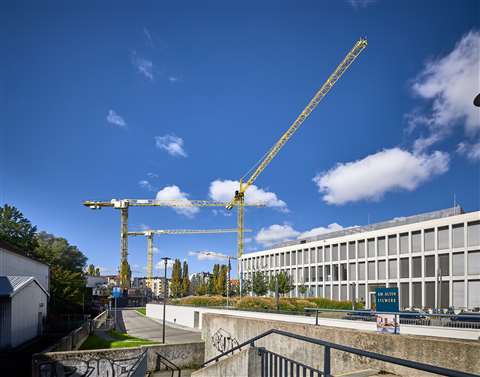 On another job in Munich three more Wolff cranes were put to work next to the Paulaner Brewery’s listed location where Carl von Linde’s ice machine used to produce ice for cooling the storage cellars from 1881 to the 1960s.

The cranes are painted in the corporate yellow of contractor Hans Holzner and are set on the edge of a cramped construction site bordering a residential area. The 7532 has a 12 tonne winch and capacity at the end of the 70 m jib is 4 tonnes. The 6015.8 and 6031 have 47.5 and 62.5 m jibs, respectively. Setting the three cranes in a triangle was done so they could reach all over the job site.