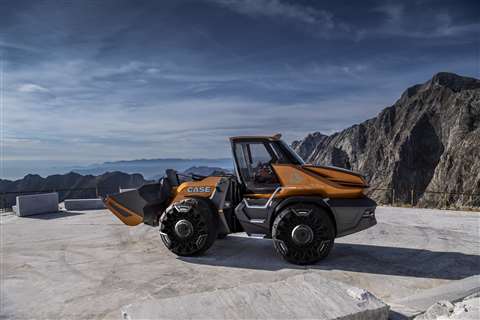 Case Construction Equipment has unveiled its concept for a methane-powered wheeled loader at the Bauma show in Germany.

Named project TETRA, the equipment manufacturer’s concept wheeled loader is powered by a methane engine produced by sister brand FPT Industrial. According to the company it delivers the same performance as its diesel equivalent.

The company said the alternative-fuel wheeled loader will reduce the overall cost of ownership and has good operational viability, which makes it financially sustainable.

A brand of CNH Industrial, Case said it had used a variety of real-world construction environments to demonstrate the feasibility of the product, and that its concept was further proof of the practicability and flexibility of natural gas.

The concept machine is said to utilise touchscreen and voice control technology in an advanced operator environment. Incorporating biometric technologies in its safety features, it also includes an obstacle detection system developed from an autonomous vehicle research and development programme owned by CNH Industrial.

In a statement Case added that the concept reflects the importance of alternative fuels and demonstrates their viability in the construction environment.