The preliminary results of a study commissioned by the European Rental Association (ERA) to look at the carbon footprint of renting rather than owning equipment did not provide any simple answers, but the study paves the way for the creation of a CO2 Calculator.

The results were presented at this year’s ERA Convention, held in Madrid, Spain – the theme of which was ‘Rental: A Sharing Economy’, reflecting the growing recognition that we need to make the transition from a linear economy to a circular one. 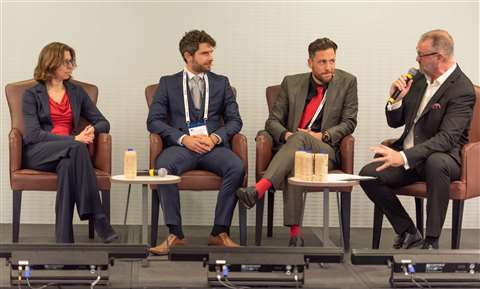 The host of this year’s ERA Convention Alex Taylor (right) speaking with (from left) Marijn Bijleveld from CE Delft, and Leonardo Verkooijen and Martjin In’t Veld from Climate Neutral Group

At the convention, Michel Petitjean, ERA Secretary General, suggested that rental is inherently sustainable because it facilitates shared usage and promotes repairability and reusability. So when the ERA asked Climate Neutral Group (CNG) to conduct a study on whether rental was more environmentally friendly than ownership, it might have been expected that the simple question would have a simple answer. Not so.

With the intention of comparing the carbon footprint of rented equipment with that of owned equipment, CNG – working in collaboration with CE Delft and SGS Search – took a representative selection of equipment types, ranging from drills to excavators, and broke down their life spans into three phases: production, usage and end-of-life.

Some interesting figures were mentioned during the presentation of the preliminary results – such as the fact that steel has the largest CO2 footprint in the production phase and so the use of more recycled steel could reduce CO2 emissions by up to 20% – but the difficulty lies in pinning down figures for an ‘owned equipment’ comparison. Without a fixed example to compare against, it cannot definitively be said that rental is more environmentally friendly.

The picture is also complicated by the fact that within the rental model there are good and bad practices that can affect its carbon footprint. For instance, equipment might not be optimised for a given task, with a rental company providing an oversized machine to a customer. In this way, the positive effects of high utilisation rates and shorter transportation distances can be undone.

It was also observed that rental companies often have the advantage of proximity. While contractors who own equipment must transport their kit large distances between projects – and transportation was highlighted as one of the major contributors to CO2 – rental companies have many depots dotted around. Once again, though, there is a trade-off: those depots require stocking, which means the production of more equipment.

The full report is due to be published on 15 June this year, and that is just the first phase of the project. Ultimately, the ERA intends to develop a CO2 calculator – much like its Total Cost of Ownership calculator – that rental companies can use to estimate the carbon footprint of their equipment.