The Chinese construction industry is still strong, but growth is slowing, as is economic growth – everything is relative though. While growth may not be occurring as quickly as in previous years the country is still very strong economically. For instance, Gross Domestic Product (GDP) growth in 2018 was 6.6% – for 2019 this is expected to be 6.3%; growth that many countries in the world would love to have themselves. 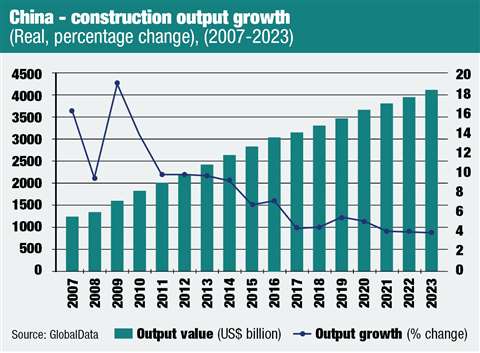 The growth in China’s construction sector has slowed

Information provided by GlobalData has suggested that the construction industry in China will see growth of approximately 4.5% over the next five years.

Danny Richards, economist at GlobalData, said, “With the authorities taking steps in recent years to rein in excessive debt-driven investment in infrastructure and urban development that had resulted in excess capacity in infrastructure and industry, and oversupply in real estate, the industry is not expected to return to the boom years of double-digit growth.”

Chris Sleight, managing director, Off-Highway Research, told International Construction magazine that, “We believe the peak of construction equipment sales has now passed and the market will stabilise at a reasonable level.

“However, forecasting demand in China is always challenging as the government is inclined to intervene to stimulate or cool the economy as it sees fit. If economic growth slows, it may use construction investment as a tool to increase growth and that could trigger another surge in activity. Conversely, if the economy overheats and inflation starts to spike it may target the real estate and construction sectors with measures to slow down growth.”

Increasing numbers of China-based Original Equipment Manufacturers (OEMs) are looking to overseas markets. For example, Mr Chang Yang, general manager of Shantui overseas, says that the firm are looking to double the value of their exports from 2018 to 2019.

“Last year we sold around US$200 million for export. This year we are targeting sales of US$400 million,” he commented. He also made the point that, for the larger China OEMs, exports used to account for 10-20% of total sales figures but that this number is increasing, and for some could be as high as 40%. It makes sense that the percentage of exports would increase to reflect the improvement in quality of construction equipment produced by the larger Chinese OEMs. 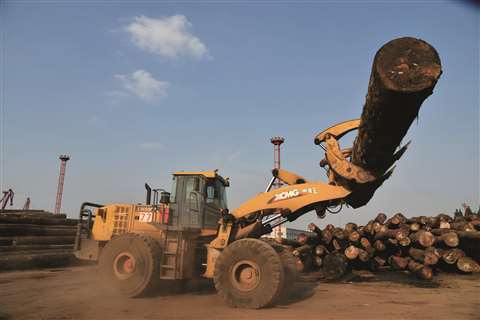 XCMG construction equipment is increasingly being used around the world

The Chinese government views infrastructure investment as a way of boosting the economy at any signs of a prolonged economic slowdown. The government moved away from this policy in 2017 but it is now back in favour, although seemingly in a more measured way than before.

Mr Liu, vice president of China-based XCMG told International Construction, “The Chinese market is very strong, as infrastructure investment from the government is still happening. It has become an important tool for the Chinese government as a way of tacking a potential slowdown, so it provides a good opportunity for construction machinery in China.”

He also commented that he believed growth would continue in the country regarding construction. “The Chinese construction market is still at the high-speed development stage. The growth is still strong. There are a lot of new products on the market compared to some other countries, and there are lots of infrastructure projects.”

Indeed, the government is reported to be pushing through US$119 billion for railway investment and US$268 billion for road and water transport projects this year.

As mentioned above, railway investment is a key focus for the Chinese government, with the US$44 billion Shanghai Urban Rail Transit Expansion one of the most expensive projects. The expansion consists of nine rail projects, including six subway lines and three intercity lines, which are due to be constructed between now and 2023. The projects will add 286km to the network in a bid to create better connection between Shanghai’s two airports and two main railway stations.

CITIC tower is the tallest building in Beijing

In other transport news, construction has been completed on Beijing’s Daxing International Airport, set to be the world’s largest in terms of passenger capacity when operational. With the city’s existing airport at capacity, the new airport will open in September this year and will have the capacity to accommodate 72 million passengers each year by 2025.

Money is also being spent on various housing and office buildings, with the country certainly not afraid of building up; a report on global skyscraper construction by the Council on Tall Buildings found that China has built more supertall buildings (defined as buildings of 200m and above in height) than the rest of the world combined.

Further evidence for China’s propensity for construction can be found in a report compiled by Lodging Econometrics which found that China’s total construction pipeline related to hotel construction increased by 15% by projects and 8% by the number of rooms.

The report revealed that there are now 2,845 projects and 590,809 rooms in the construction pipeline. In terms of cities, Guangzhou has the highest amount of hotel construction work in the pipeline, followed by Chengd, Suzhou and Hangzhou.

China and US trade war

The trade war between the US and China is ongoing

The world’s two biggest economies, China and the US, have been engaged in a long-running trade dispute, which escalated when President Trump raised tariffs on US$200 billion worth of Chinese products.

China retaliated with US$60 billion worth of tariffs of up to 25% on US goods – building materials and some construction machinery will be subject to this higher tariff.

The US currently has around US$250 billion of tariffs applied to Chinese goods, with China having US$110 of tariffs on US products – the tariffs vary from 10 to 25%. It is estimated that approximately US$700 billion of goods were sent between the two countries in 2018.

Experts have warned that the trade war could harm both economies.

An IMF report stated, “In China, the negative effects of escalating tariffs and weakening external demand have added pressure to an economy already in the midst of a structural slowdown and needed regulatory strengthening to rein in high dependence on debt.”

The Chinese economy may not be seeing the same high level of growth as it did in recent years, but it is still strong – especially compared to recent history. In an interview, chairman and president of China-based OEM Sunward, Mr He, spoke about the difficult times for the market in the recent past and, looking ahead to the future, mentioned that steady growth could be best for the country.

“From 2012 to 2016 it was a very difficult time for the market in China. However, compared to other companies, Sunward did not shrink the business, we kept the investment for the R&D and the quality of the product,” he commented.

“In the last two years the whole market has grown very strongly and I think that 2019 will be another good year. In the second half of the year the growth of the whole market will become more steady – this  could be good for the market.”

High growth often leads to a period of large decreases. The Chinese economy is in the midst of a small slowdown, but a sustained period of slower but more sustained growth could be good for the country’s economy and, in particular, the construction industry.

The Belt and Road Initiative (BRI) is arguably the biggest infrastructure investment project in the world, and is of great important to the Chinese construction industry.

Wanchun Zhou, vice president at Sany Heavy Industry, told International Construction that around 70% of the firm’s overseas sales come from the BRI. 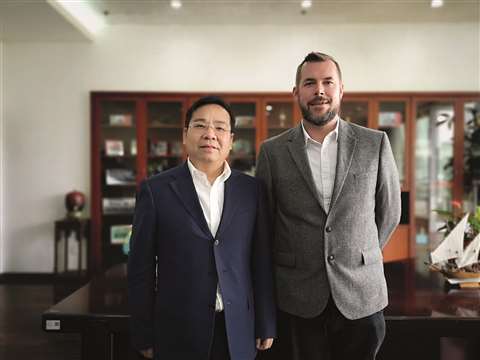 He said that one of the key things the initiative had done was to get more people using Sany equipment; he commented that there has previously been a bias against China-produced equipment, with people thinking that the quality is not high.

“The policy has given other countries a chance to know China and China’s products and technology. The biggest contractors in China have worked in these big projects overseas and this has improved our sales in overseas markets.

”The policy has helped to bring Chinese products to work sites around the world. The more that people use our products the more confident they become with them.”

It is estimated that China has invested US$210 billion through BRI, the majority in Asia, although there are signs that co-operation with European countries may increase. Italy recently became the first G7 member to conclude a BRI agreement.