Tuyet Nga Company is celebrating 20 years as a Genie distributor in Vietnam.

The partnership was forged in 1999 when Tran Kim Dzung, president of Tuyet Nga realised the potential of MEWPs in contrast to the scaffolding used in the Vietnamese construction industry at the time. “I chanced upon Genie equipment in a construction magazine. I was impressed by how high tech their machines were. I immediately knew I need to work with them to bring our construction industry standard to a new level,” said Dzung. 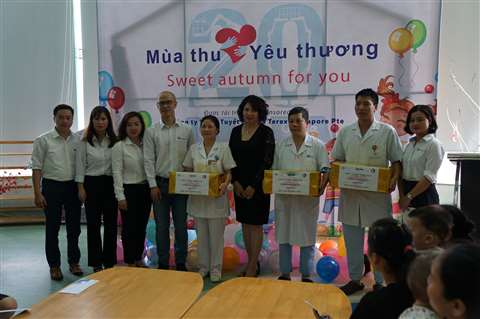 Tuyet and Genie at the National Hospital of Pediatrics.

During this period Genie was already discussing opportunities to penetrate the Vietnam market. “TNC stood out from the very start —the fact that Mdm Dzung personally sent us a fax, as well as immediately ordering a container of push-around aerials, quickly opened up the market for us,” explains Jim Barr, vice president, APAC, Terex AWP.

In the early 2000s, the shipyard industry in Vietnam was booming. The synergy between TNC and Genie allowed them to quickly move into the shipyard repair and maintenance sector. “One of the biggest milestones for Genie and Tuyet Nga in our journey was obtaining 100% of the shipyard market share from 2003 to 2008,” said Daniel Ho, vice president, Asia, Terex AWP.

Investments from foreign companies drove Vietnam’s civil and industrial construction growth. The demand for MEWPs was also spurred by the entry of foreign contractors from developed countries such as Germany, the US, Australia, Korea, Japan and Singapore, thanks to large-scale projects such as the construction of the new airport terminal.

With the Vietnamese government focusing on reducing accident rates at jobsites, TNC decided to expand its MEWP offering with a 100% Genie fleet. Phan Van Anh, vice general director, TNC, added, “As TNC business grew, we wanted to expand into the rental business. However, we didn’t have enough experience. Genie was instrumental in guiding us in setting up this new business unit. It was an untapped industry that we managed to dominate by giving excellent customer support.”

To mark the successful partnership Terex and TNC sponsored the Autumn of Love programme at Vietnam’s National Hospital of Pediatrics. The two businesses gave VND 50 million ($2100) towards medical treatment for 30 patients facing challenging circumstances, as well as 200 meals to the patients and their families. They also donated three pediatric pumps to the hospital. The total support amounted to VND 120 million ($5,200).