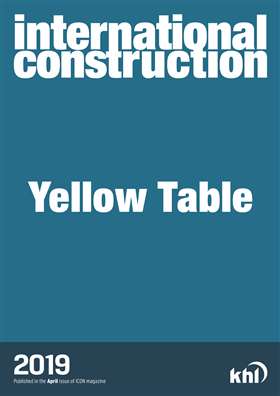 The year 2018 was another strong year for the construction industry. The financial information supplied by many of the world’s leading Original Equipment Manufacturers (OEMs) – as well as anecdotal evidence – has revealed that in 2018 sales increased in most regions in the world; it was not a case of one or two regions enjoying good growth and compensating for falling figures elsewhere.

In last year’s Yellow Table the combined equipment sales of the world’s top 50 OEMs amounted to US$162 billion, an increase of 21% on the figure generated by the 2016 list. With the 2017 table having enjoyed such strong growth it is a sign of the health of the industry that this year’s table sees a combined revenue total of $184 billion – an increase of 13.5% from 2017’s figure.

The fact that revenues have increased by 13.5% following 2017’s strong growth shows the strength of the industry. It can also be argued that growth of this level is more sustainable.