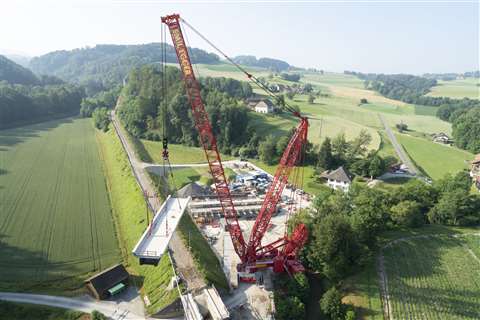 Emil Egger on the bridge lift with its liebherr LR 11000

A tricky bridge lift was made possible by crane owner Emil Egger in Switzerland using a special ballasting system on its Liebherr LR 11000 crawler crane.

It was the first time the V-frame and VarioTray had been used on a job. Egger mounted the hydraulically adjustable folding frame for the suspended ballast on the 1,000 tonne capacity lattice boom crane. First it completed a spectacular bridge lift near Lausanne and soon after its second job was to remove an old fire ship from the River Rhine in Basel.

A shortage of space on the bridge job meant that without the V-frame it would have been significantly more expensive, the company said. In addition to limited room there were protected trees and the heavy bridge had to be lifted into place over a river after slewing through 180 degrees at long radius. 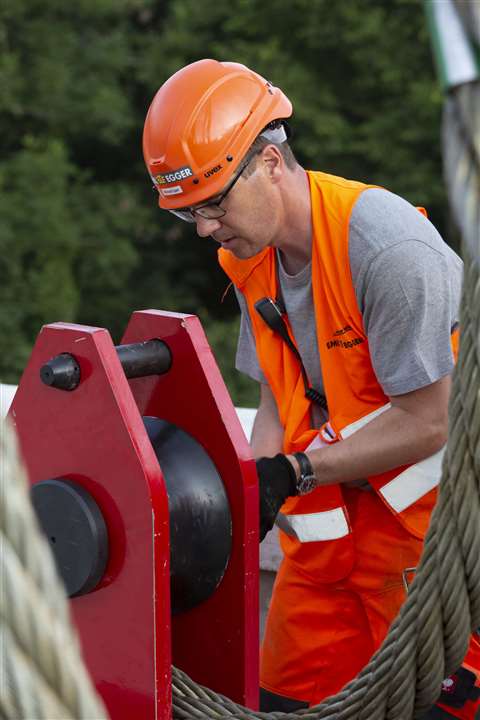 Michael Egger, managing director, in the thick of it

Commenting on the job Michael Egger, company managing director and crane enthusiast, said, “Without the hydraulically adjustable ballast radius, hoisting the bridge would have been significantly more expensive. First, it would have required much more expensive work on the embankment to get closer to the abutments with a crawler crane. And then we would also have required a much longer crane track to complete the bridge immediately in front of the abutment.”

Employing the V-frame allowed a reduction in suspended ballast radius to 13 metres after the 380 tonne load was lifted, Liebherr said. It allowed the ballast pallet to be guided past a small row of protected trees as the crane slewed. Having placed the railway bridge at a radius of 38 metres, the 440 tonne derrick ballast pallet was at a distance of 28.5 metres.

Using the VarioTray detachable ballast function helped speed up the operation. Unbolting the central section of suspended ballast means no mobile crane is needed to add and remove slabs of counterweight. Egger explained, “Because of the situation on the site, we would have needed a large crane for this job – we would have lost an enormous amount of time and required a great deal of space. In most cases, our LR 11000 can position the derrick ballast pallet, or at least the outer section, itself since the central section of the ballast remains on the crane and therefore only around 300 to 350 tonnes have to be moved.” 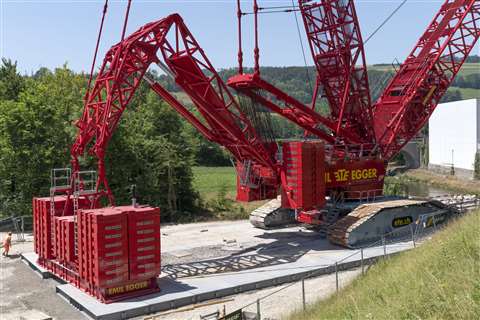