Above and below for Tappan Zee

Tappan Zee Constructors is a consortium between Fluor Enterprises, American Bridge Company, Granite Construction Northeast and Traylor Bros that was hired to design and build New York’s Governor Mario M Cuomo Bridge, one of the USA’s largest single design and build contracts of its kind. The project started in 2013 and the final southbound lanes opened in September last year. Deconstruction of the old bridge continues. 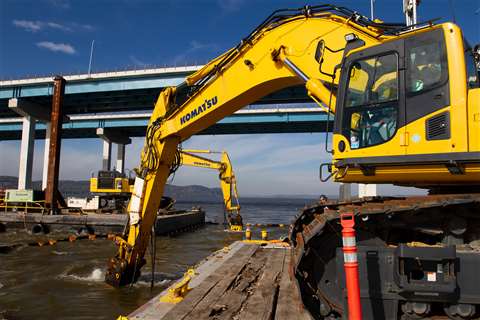 The final phase involved careful deconstruction and debris removal from the old bridge. Adding to the challenge were the accelerated schedule for the project, the sheer size of the bridge, variable water depths of the Hudson River below, and windy conditions. The river flow, tide ranges, water clarity and visibility were also major issues.

“As soon as the excavator bucket, clam shell bucket, cutter head on a dredge goes under the water you can no longer see it,” said Lou Nash, president of Measutronics Corporation, an integrator of Trimble Marine technology.

Tappan Zee consulted with Lou Nash, the Measutronics team and Trimble to overcome these challenges. The positioning and guidance systems used included Trimble and Teledyne components – Trimble software, hardware, and sensors, and Teledyne marine imaging sonar for subsurface applications. Measutronics calibrated the equipment and installed the systems and all the sensors. With the system calibrated, Measutronics was able to check against the survey and start training the operators on how to use the software. The team also set up the machine in-cab screens and made sure the data flow was accurate.

Trimble Marine Construction software was used on all tools across the project for excavation, placement of structures and demolition work. Regardless of the tool being used with the machine – buckets, pincers, shears, hammers, jackhammers – by using the marine software and sonar equipment each had precise guidance. 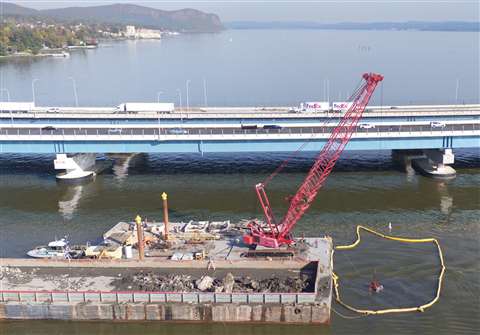 The demolition team started by using the system to establish a baseline of conditions in the river. This began with three-dimensional point cloud data collection of submerged features via a survey vessel using sonar.

“We’re able to look at the structure beforehand and then take that imagery, evaluate and confirm elevations, quantities and conditions,” said area manager Blake Yaffee.

After a baseline was set, Tappan Zee used TMC software and Teledyne SeaBat T20 high resolution multibeam echosounder to create a plan for breaking up the old bridge’s concrete structures into rubble for safe removal from the Hudson River bottom.

Surface data was then provided to the various machine types for guidance in deconstructing the submerged structures. TMC software was also used to monitor and visualise deconstruction progress of submerged structures and bridge components. As deconstruction progressed to removal, the survey vessel continually collected data and updated the existing 3D surface model, which was transferred in near real time to the machine fleet.

“From our system, what the operator sees in the first phase is where the tool has been so he’s getting proper coverage of the inner deconstruction process,” said Lou Nash.

The software follows a traffic light-like pattern, indicated in green on the operator’s control box when excavation is needed and changing colours to yellow as the operator gets closer to grade.

The software provides highly accurate locations and visualisation, according to machine operator Andrew Teese. He has been able to retrieve football-sized pieces of concrete which would have been nearly impossible to spot otherwise.

“I also have depth, I have the bucket position in two different views, which aided me in locating debris to be removed,” said Andrew.

“It gives me a precise location, a ‘bird’s eye view’, and I can position my boom point wherever I want on the image and find whatever was previously scanned.”

Blake Yaffee added: “Anybody who has performed underwater demolition is very familiar with the term ‘working in the blind’ because that’s basically what people do.”

“For us, the investment in the product against the scale of the project, together with the fact that the sonar and the software can be reconfigured and used on the next project, made it very easy to bring this equipment on.”

In addition to quickly identifying and removing debris underwater, precise positioning from TMC and Teledyne has helped Tappan Zee Constructors break up difficult components and material underwater, without relying solely on divers.

Scanning the river bottom, the team also identified eroded structures, components and materials that had collected over the years from the old bridge.

Tappan Zee Constructors recorded these scans and was asked by the New York State Thruway to remove the material. As a result, the site was returned to the state in a better condition than when the work started.