Energy provider EDF Energy is building two new nuclear reactors at Hinkley Point C (HPC) in Somerset, in the south west of the United Kingdom. HPC is the first new nuclear power station to be built in the UK in over 20 years and the project is extensive with over 4,000 workers presently on site. During peak construction up to 5,600 people will be on site at any one time. Construction started in the second half of 2016 and is expected to take around ten years to complete.

One of the most eye-catching cranes on the Hinkley Point C site, with its jib rising high above the other tower cranes, is the Favelle Favco M2480D Heavy Lift Luffing (HLL) tower crane, which is commonly dubbed ‘the world’s largest luffing jib tower crane’.

Erecting the M2480D at the Hinkley Point C site

It was supplied by Australian heavy-lift luffing crane solutions provider Marr Contracting (Marr) for contractor Balfour Beatty, who is contracted to provide the construction of the outtake and intake tunnels for the cooling water for the two nuclear reactors.

Initially Balfour Beatty was considering using large crawler cranes and a gantry system to do the work. Marr persuaded Balfour Beatty, however, that this approach would require a lot of temporary works and double handling of componentry and that the M2480D located in a position where it could offer a single solution for all lifting requirements would work best.

The lifting requirements included installing a tunnel boring machine (TBM), reaching out to the tunnel segment storage area to lift and place tunnel segments, and constructing the conveyor system around the outside of the heat sink excavation.

Marr shipped the M2480D over from Australia and it was setup in February 2019 ready to commence work on the first reactor. It was setup using the assistance of a Liebherr LTM 11200 mobile crane owned by heavy lift and transportation specialist Mammoet. Setup took two weeks and, to assist, Marr sent a team of four from its Australian office (including riggers and fitters and an operator to train the Balfour Beatty team), plus another two personnel from its UK office.

The crane was erected on 72 metres of freestanding tower with 102 metre radius boom and fly combination. It has a capacity of 25 tonnes at 100 metre radius and a maximum capacity of 220 tonnes in this configuration. According to Marr, this allows the M2480D to perform all the heavy lifting requirements in higher wind speeds and at greater speed than using traditional cranage. The freestanding crane occupies a smaller area than a similar size crawler in an already congested construction site and does not require a super lift attachment to complete any of its lifts compared to a heavy lift crawler option, Marr says.

By being on a 72 metre tower, the M2480D is well above any of the other luffing cranes on site so that Balfour Beatty can operate independently of other contractors working on the project. As an additional safety enhancement Marr designed an interface between the M2480D’s hydraulics control system (that controlled the hoist, luff and fly winches) with the anti-collision system being used across the other tower cranes on the project. This system is from French zoning and collision-avoidance equipment specialist AMCS Technologies which, by June 2019, had installed its DCS 61-S anti-collision and zoning system on 20 of the expected 55 tower cranes on the site.

With the crane allocated to complete the tunnelling scope of work, it was still hooked into the AMCS system adopted by the project to ensure there was no clash with other work fronts. The AMCS system was also tailored to suit the main hook and auxiliary fly hook on the M2480D, which is something that has not been done before on the AMCS system, although Marr says it has done this before using other anti-collision suppliers on projects in Australia.

According to Marr, the installation of the TBM also presented Balfour Beatty with the challenge of how to rotate a number of heavy components from transport to installation. With Balfour Beatty reluctant to use two separate cranes to rotate the loads, Marr says it developed a procedure within its crane system which allows the loads to be picked up and rotated using the main hoist and fly hoist within a single crane lift simply and safely.

Managing director of Marr Contracting, Simon Marr, said, “We’re incredibly excited to be working on this project. Although we are well-known at home (in Australia), this is our first project in the UK and it’s great to be working with a team that is as forward-thinking and innovative as Balfour Beatty. As problem-solvers who love a challenge, we tend to think differently – so it’s been fantastic to work with a client that is as willing to embrace our heavy lifting technology as Balfour Beatty has been.”

Perhaps the most eye-catching ‘first’ on the HPC site is from Big Carl, the 5,000 tonne capacity super heavy lift ring crane (with the nomenclature SGC-250), owned by Belgian-headquartered heavy lift and transportation company Sarens. This is the crane’s first job and it started working at the site on Monday 23rd September following ten weeks of being rigged. It is scheduled to be there for the next four years during which time it will lift more than 600 pieces of prefabricated components. The heaviest lift will weigh 1,600 tonnes.

Big Carl was commissioned by the BYLOR joint venture. BYLOR is the consortium between UK-headquartered construction company Laing O’Rourke and French industrial group Bouygues TP and it is delivering the main civil engineering works at HPC worth more than £2.8 billion (US$3.62 billion). BYLOR also commissioned the other tower cranes on the site that were mentioned earlier.

One of the SGC-250’s key lifts, scheduled for around spring 2020, will comprise raising the dome of a building that houses prefabricated reactor building parts; it will lift these parts out of the dome building and slew them into the new reactor building. The dome building is used to ensure large components can be built on site in covered, factory-like conditions and is designed to help save time and improve quality. The dome will be lifted via 12 lifting points which will be equalised using Sarens’s Sarspin load levelling system.

Big Carl will run on over six kilometres of ArcelorMittal steel rail. Three lift locations, comprising 48.5 metre turning circles, are linked by lengths of straight track. The crane runs on 128 wheels for slewing and lifting and on 96 wheels for travelling. It uses hydraulic cylinders to switch from the ring to the straight rails.

Rob Jordan, EDF construction director at Hinkley Point C, added, “The crane allows us to innovate in the way we build the power station, lifting complete pieces out of our factory bunkers and into place across the site. Pre-fabrication helps us boost quality, gives better conditions for skilled workers and saves time – that’s good news for the project and an example of learning lessons from successes at other projects.”

More details about the lifting procedures being used on the HPC project will be discussed by Ashley Daniels, head of lifting and temporary works, Hinkley Point C, EDF Energy, and Garrick Nisbet, head of lifting assurance, Notus Heavy Lift Solutions and lifting manager, Hinkley Point C, at the forthcoming World Crane and Transport Summit in Amsterdam on 13 November. If you are unable to attend this event, a video of the presentation will be posted on the ICST website in due course.

The delivery of the Sarens SGC-250 components from Avonmouth docks in Bristol to the Hinkley Point C construction site, a journey of 45 miles (73 km), was conducted by UK specialist contractor Collett. The Yorkshire-based company moved the crane’s fabricated steel pieces with a total combined weight of more than 3,000 tonnes.

It took Collett two 12-hour day shifts to unload all the components from the delivery ship. A short timeframe meant Collett engaged all available crane services, including port cranes, mobile cranes and specialized transport vehicles. The pieces were arranged in a laydown area in the port to an agreed plan for sequential onward delivery to site in the order they’d be needed for the crane’s assembly. The HPC Delivery Management System gave specific routes for the deliveries to pre-arranged dates and timeslots. In April Collett started transporting the crane pieces to site. Over the next four months Collett made more than 400 deliveries. 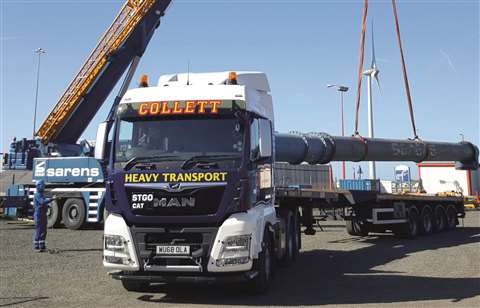 It took Collett over 400 deliveries, made over four months, to transport all the Sarens SGC-250 components 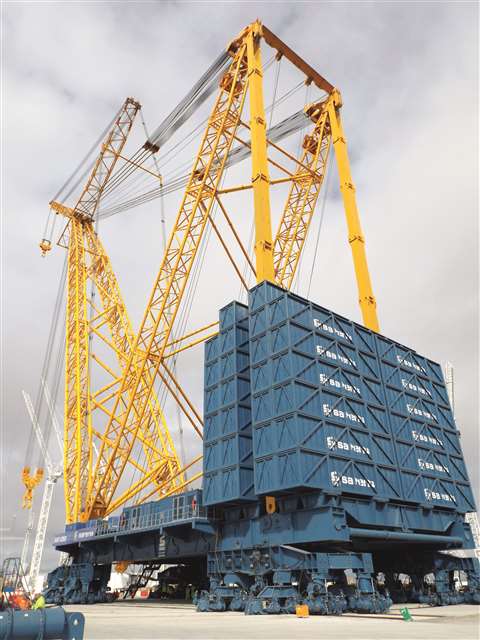 Sarens SGC-250 can carry up to 52 counterweight containers, each one weighing 100 tonnes and filled using locally sourced material 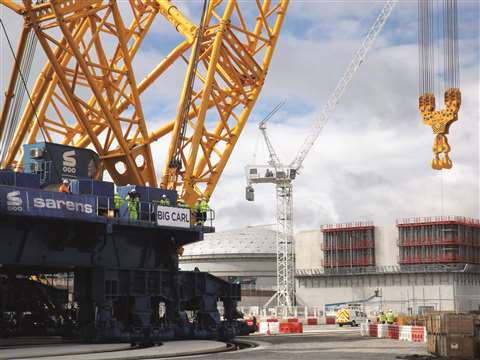 ‘Big Carl’ will lift prefabricated parts for the new nuclear reactor building out of the domed building on the left, where they are kept in controlled conditions, and slew them into their new home (out of shot) 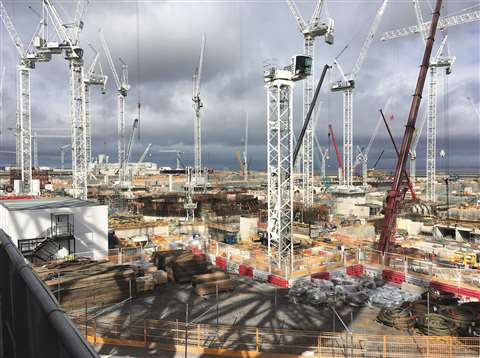 Up to 55 tower cranes will be on site 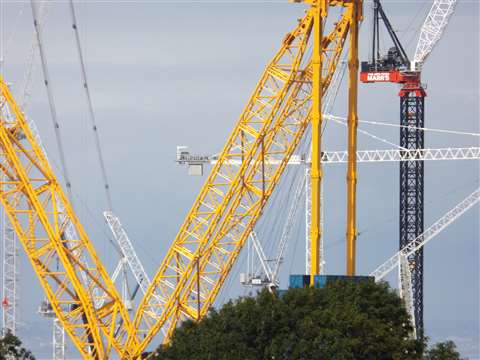 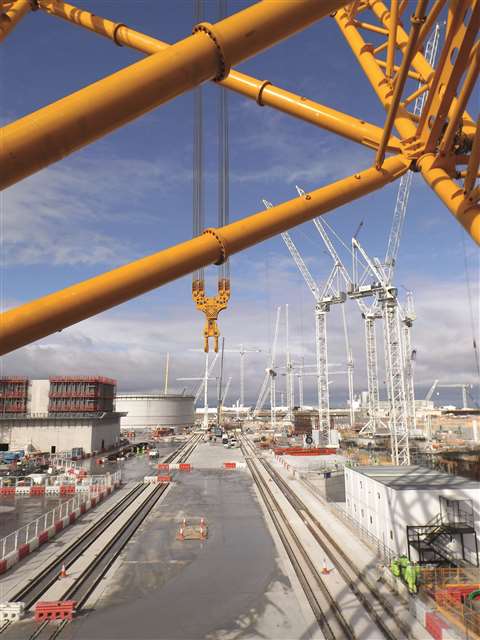 The crane will run on over six kilometres of ArcelorMittal steel rail. Three lift locations, comprising 48.5 metre turning circles, are linked by lengths of straight track 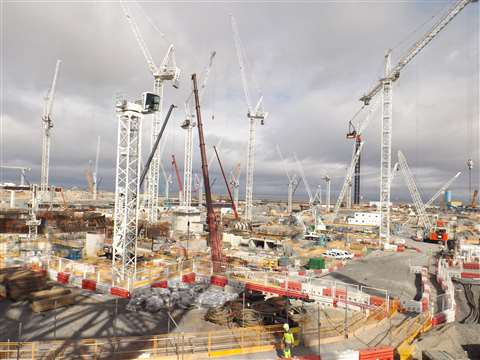 The tower cranes, including the M2480D, are installed with anti-collision system from French company AMCS 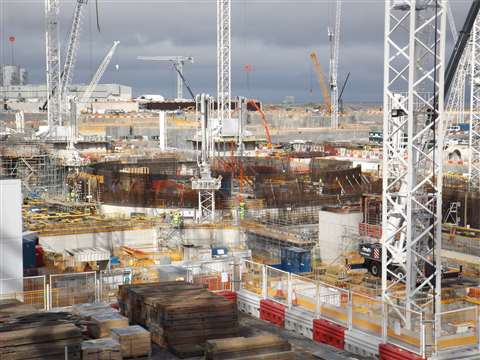 Construction of the first nuclear reactor 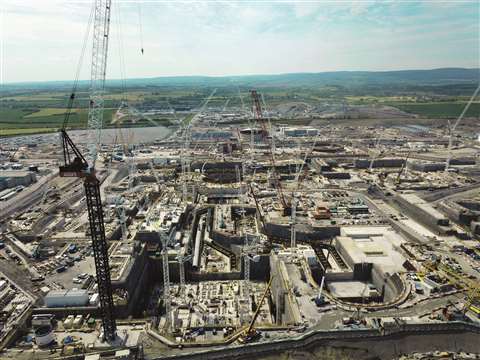 The view south across the Hinkley Point C Construction Site showing the main excavations and pipework for the cooling water systems of unit 1.Image credit: EDF

HPC is Marr Contracting’s first project in the UK 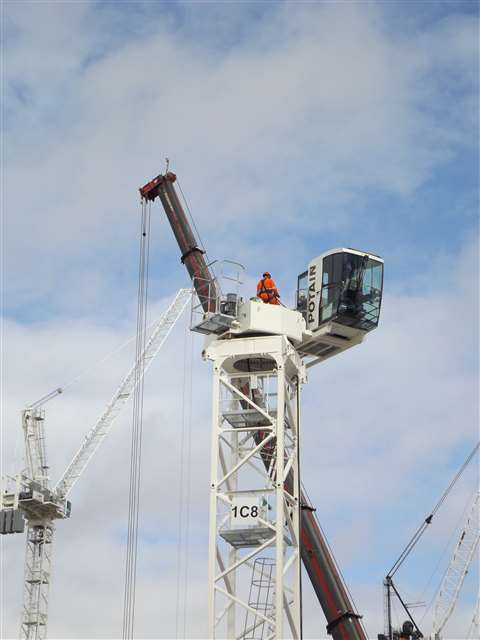 BYLOR, the consortium between UK-headquartered construction company Laing O’Rourke and French industrial group Bouygues TP is delivering the main civil engineering works at HPC worth more than £2.8 billion (US$3.62 billion). It commissioned the tower cranes on site

“It’s the crane’s first job and I am confident that everything will go very well because we have done lots of testing already,” said Hendrik Sarens, owner and director at Sarens. “Everything has gone as planned… no doubts about that” 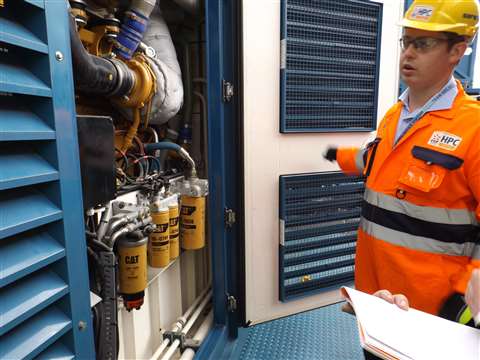 The Sarens SGC-250 is powered by six powerpacks, with each powerpack comprising two engines. The crane can operate using just one powerpack – but at a much reduced speed

This crane operator is smiling for a reason: he gets to operate the ‘world’s largest crane’ 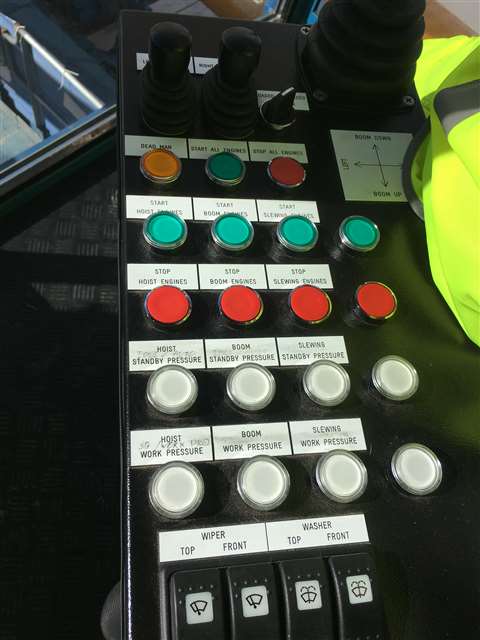 Part of the SGC-250’s control pannel