While they show that the success of Chinese manufacturers has had a significant impact on this year’s ICm20 rankings, with XCMG, Zoomlion and Sany achieving increases of 48, 83 and 78 per cent, respectively, in their reporting currency, they also show improvement across the board.

The world’s top 20 largest crane manufacturers saw rises that, in many cases, were in double digits.

Up two places on 2018, 2019’s table sees Chinese manufacturer Sany burst into the top 10 after a dramatic increase in revenues. With sales of its mobile, crawler, tower and truck mounted cranes growing thanks to China’s Belt and Road Initiative, the company’s revenue has almost doubled from US$751 million in 2017 to $1,323 million in 2018, putting it at number 10 on the 2019 ICm20 rankings.

Established in 1932, Austrian manufacturer Palfinger moves up one place on the ICm20 rankings to ninth position with revenues totalling $1,551 million in 2018. In December last year, CEO Andreas Klauser, announced that the company planned to strengthen its collaboration with China-based firm Sany and implement a structural turnaround that would see it expand quickly. With 2019 almost over and Palfinger reporting growth for every quarter of 2019 so far, 2020 could see the business climb even higher on the ICm20.

Not taking into account the Japanese manufacturer’s acquisition of Demag, as it was completed in August 2019, the previous year saw Tadano’s revenue and profit increase for the first the first time three years. The company’s net sales for the 12 months to 31 March 2019 amounted to $1,720 million, allowing the business to climb to eighth place on the 2019 ICm20’s top 10.

With its 2017 revenues of $978 million almost doubling to $1,766 million in 2018, Zoomlion rises to seventh place on this year’s ICm20. The dramatic increase in revenue is the result of several factors but has been primarily driven by the increased sales resulting from China’s Belt & Road initiative infrastructure projects in its home market.

Down one place on 2018, Manitowoc saw its revenue rise by almost $300 million to $1,850 million in 2018. Earning sixth place on the ICm20, this year also saw the manufacturer open a new facility in the Philippines and reorganise its top level management team in Europe to improve customer focus and bring it in line with its Americas and Asia-Pacific regions.

Based in Shanghai, China, ZPMC specializes in port machinery and heavy-duty equipment. The state-owned company, which slipped one position to fifth place with a 2018 revenue of $2,115 million, is said to have provided container machinery products for 300 wharves in 100 countries, accounting for around 70 % of the world’s market share.

From a revenue of $1,528 million in 2017 to $2,229 million in 2018, XCMG moves up three places this year. Landing just outside the top three, the increase in revenue could partly be due to the company’s expansion into other markets. According to China Daily, at Bauma China 2018 the manufacturer announced its plans to launch 84 new types of customised cranes in overseas markets.

Based in Finland and comprising the Kalmar, Hiab and MacGregor divisions, Cargotec is a non-mover at three. While the company’s 2018 revenues came in at $2,468 million, $20 million lower than its 2017 figure, the small decrease is likely a result of its expansion. In 2018 the company completed the acquisition of specialist businesses Effer and TTS, the financial impact of which will be reflected in the company’s 2019 revenues and the ICm20 2020. 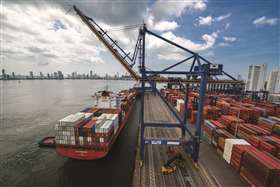 In 2018 Cargotec acquired both TTS and Effer

2. Konecranes, including MHPS from Terex

The only company in the top three of this year’s ICm20 to increase its revenue, Liebherr comfortably holds onto its number one spot with 2018 revenue of $3,907 million. Up from $3,788 million in 2017, the German manufacturer’s range of wheeled mobile, crawler, port and marine cranes are used in almost every industry in the world.

Financial notes on the ICm20