Elevation 2019 saw almost 150 attendees converge on the DoubleTree by Hilton Hotel, Coventry, as the event launched by the International Powered Access Federation (IPAF) last year made a successful return.

The afternoon session began with an IPAF Open meeting, giving an update on various projects and developments to anyone who wished to join, and then a short afternoon conference was hosted by Giles Councell, IPAF’s Director of Operations, featuring an array of 20-minute presentations from construction, safety and access professionals. 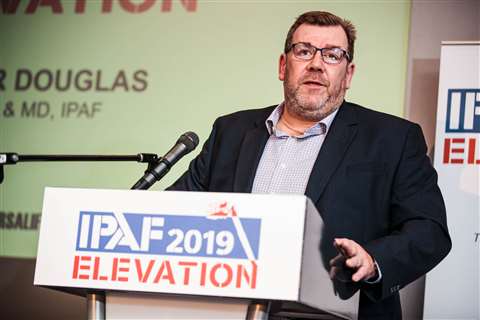 Peter Douglas, incoming CEO & MD of IPAF, was first on to the rostrum. “The UK is where it all began for IPAF, and it’s also the most advanced powered access market from a safety perspective in the world,” he said in his welcome address.

“New minimum standards of membership criteria, including the minimum IPAF Rental+ standard for UK hirer members, mandatory reporting of accidents, as well as the work on apprenticeships and upskilling engineers all reinforce the commitment of the UK members,” he added, while also thanking all of the council and committee members and event sponsors Skyjack, TVH, SpanSet and Versalift.

Darren Nash of the UK HSE gave a short overview of the scope and progress to date of the HSE’s project evaluating MEWP secondary guarding systems, looking at the regulations on secondary guarding on MEWPs and the efficacy of different manufacturers’ designs in terms of protecting occupants from crushing and trapping.

Kevin Howells, MD of Datatag, then talked about the lead the company is taking in protecting construction and agriculture machinery from theft via the CESAR scheme. “The cost of machinery theft is £1-1.5m per week, and that doesn’t include downtime, rehire or penalties imposed,” he said, explaining that Datatag’s patented international secure registration scheme, using a range of different theft countermeasures and tracking technology, had helped in theft prevention and boosted recovery rates.

“JCB theft is down by 68.5% since 2014 through joint initiatives such as these,” he said, before explaining how Datatag is now changing its focus to help with emissions enforcement through CESAR ECV – which is set to become “the DVLA of NRMM”. 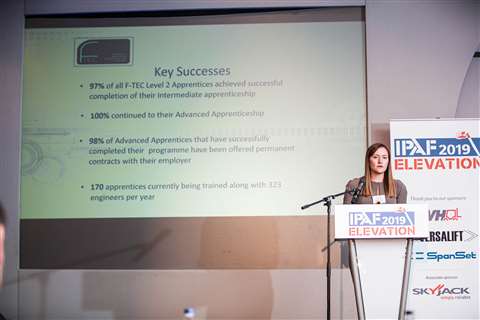 Julien Michelli, Product Development Manager at Haulotte, then took the stage to talk about the rise of smart, clean MEWPs: “We must develop technology to power big machines; machines for the rental industry; machines that operators can work with; we need to change habits of operators and hire customers.”

Katherine Roberts, Customer Account Executive from F-Tec, explained how F-Tec is partnering with TVH to deliver advanced engineering training and will be working with IPAF to qualify service technicians, with the Trailblazer apprenticeship for lift truck & powered access engineers soon to be accepting candidates. “We don’t have enough engineers; the pool’s thin and getting thinner is something I hear all the time,” she said.

In terms of issuing smart cards, security and fraud protection “others can learn from IPAF”, she said, also pointing out that the move to IPAF Rental+ minimum standards for hirer members in the UK also aligns with Build UK’s Common Assessment Standard, making it more straightforward for companies to meet pre-qualification contracting requirements. 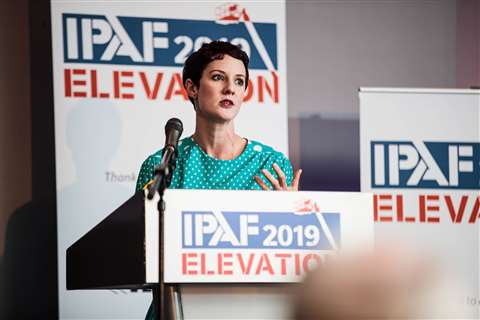 Jim Morris, Operations Director of Drone Surveying, and Graham Brown, CEO of ARPAS-UK, the UK Drone Association, talked about how drones can complement what hire businesses offer, adding functionality. “We’re not in direct competition and shouldn’t be seen as the enemy – it’s not drones vs MEWPs. We’re already working together and can do more to further safety in the industry,” Graham Brown said.

On the subject of safety, Peter Bennett OBE, Managing Director of PASMA and Executive Director of the Ladder Association, talked about the valuable work of the No Falls Foundation, of which he is also a founder and trustee. “I’m very pleased IPAF is supporting No Falls, the first and only charity dedicated to raising awareness of the consequences of falls from height,” he said, before screening some videos aimed at raising awareness of the impacts of injuries and deaths caused by falls at work.

Jim Maccall, Director of Learning for Hire Ltd, an IPAF-recognised training provider helping deliver the IPAF Roadmap to qualified MEWP technician status, talked about the different kinds of technician already in the industry in a humorous overview. “I didn’t know I had to check that… nobody told me to check it… nobody has trained me to check it, are things we hear all too often. You’d like to think some common sense applies, but we can’t assume that, so we need to train people properly,” he said

When someone gets it wrong, it shouldn’t be a sacking offence, he added, “but there may be a training opportunity. There’s no career progression for technicians as it stands, so to progress many of them feel they have to ‘come off the tools’. The IPAF Roadmap is the future.” 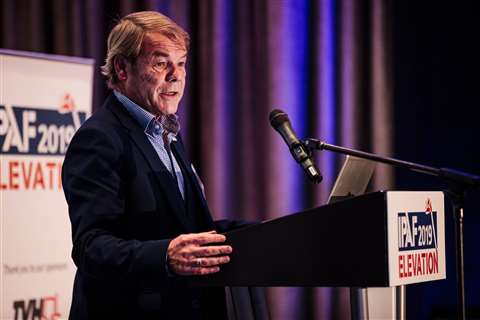 The final speaker of the day was Paul Roddis, IPAF’s Training Manager, who gave a general overview of the latest developments in IPAF training and in particular the advancements in technology such as virtual reality (VR) and augmented reality (AR), neither of which are as new as people assume, he pointed out. Big changes in 2019 include the update of IPAF’s MEWPs for Managers course into eLearning, and the successful trial of the IPAF PAL+ advanced operator assessment into the VR environment using simulators. Updates to the operator (PAL) course, CAP assessment and load/unload training are on the horizon for 2020, he added, while all valid IPAF PAL cards anywhere in the world will all be “smart” cards from January onwards.

In the evening there was a networking event and gala dinner, with three-course meal and entertainment from Tim Oliver & Brett Sirrell, aka David Brent and Gareth Keenan from The Office lookalikes, giving a hilarious health & safety briefing and handing out the IPAF Smooth Operator Award 2019 to Dan Challans from InspHire, who also gamely helped out with a magic routine and dance number. During the evening there was a collection for the No Falls Foundation, which raised almost £800 for the charity.

Richard Whiting, IPAF’s UK Market General Manager, who helped oversee planning and organisation of the event, comments: “Last year’s Elevation was a new format, which everyone seemed to enjoy, so we were happy to repeat the formula this year and once again it seems the excellent speakers line-up and fun, friendly networking, gala dinner and comedic entertainment have all combined to great effect.

“Thank you and well done to all who helped organise, all our speakers and sponsors, and of course everyone who attended. We will look to reprise the event in 2021, as the IPAF Summit & IAPAs 2020 will be in the UK, at the Millennium Gloucester Hotel London Kensington on 23 April. Hopefully we will see many Elevation attendees at that event next year – awards nominations are now open and bookings are being taken.”

For more information about IPAF visit www.ipaf.org or to find your nearest office or representative see www.ipaf.org/contact. To find out about the IPAF Summit & IAPAs, in London on 23 April 2020, and to book your place, visit www.iapa-summit.info