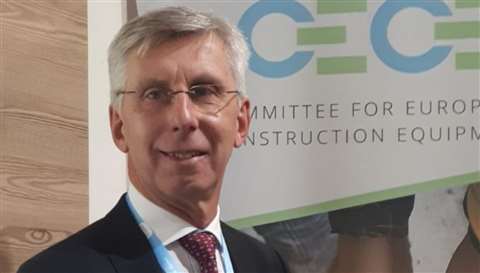 The Committee for European Construction Equipment (CECE) has announced that Niklas Nillroth has become its new President.

The new president is also currently chair of the Swedish Construction Equipment Association (SACE) and brings a wealth of industry experience to the role, having held management positions in areas including product development, purchasing and project management.

This year, Nillroth will oversee CECE’s proposals in response to a number of relevant EU regulations. The association has identified three key items of legislation for 2020, proposed by the European Commission – the machinery directive, the outdoor noise directive and the road-circulation framework for off-highway machines – that CECE will analyse and respond to.

Speaking at the CECE Summit in Brussels in October– following the announcement that he would succeed Enrico Prandini – Nillroth said, “As the CECE President I will devote particular attention to the issue of sustainability in construction. With a special focus on the push for emission reduction and the initiatives being put in place by authorities and the rest of the industry.

“What is still missing – and I want to focus on – are the pull factors making these technologies appealing and mainstream for client and users in the larger construction industry.”

He added, “Of course, reducing emissions with new technologies like electrification and different tools within the digitalisation area, really makes sense.

“Also, within the social area of sustainability, we can improve safety by using autonomous machines and also improve the operator environment with all kinds of new devices, which digitalisation and other innovations will offer.”

CECE currently represents approximately 1,200 construction equipment manufacturers from throughout Europe. In total, the member companies generate some €40 billion in annual revenue and employ in the region of 300,000 people.