More than 6.6 million Americans filed new claims for unemployment last week, some of them construction workers who are off work due to increasingly strict shelter-in-place orders resulting from the coronavirus pandemic. 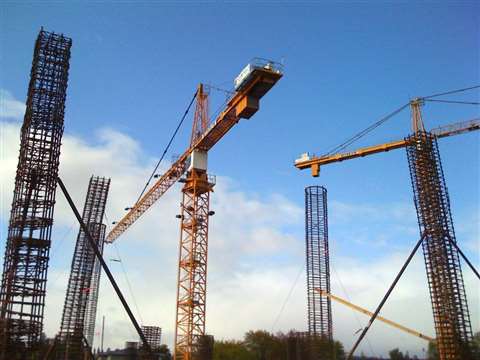 Construction stops in many areas, putting many in the US out of work

According to a report in the New York Times, the US Labor Department says new unemployment claims set a record for the second consecutive week. The latest claims brought the two-week total to nearly 10 million.

In San Francisco, California, where residential construction had been ongoing and considered “essential” until recently, Bay area workers are now off work, reports say.

Six Bay Area counties including Alameda, Contra Costa, Marin, San Francisco, San Mateo, and Santa Clara, along with the city of Berkeley, announced that most construction will now be halted under a tightened, joint shelter-in-place order.

Among the few exceptions are projects necessary for essential infrastructure and projects associated with healthcare operations such as construction directly related to the COVID-19 response.

In New York City, a new mandate to close all non-essential construction sites, including most of the 4,000 new buildings rising across the city, was already mostly in effect by the time Gov. Andrew Cuomo announced it on 27 March.

Only essential construction, including on roads, bridges and at homeless and health care facilities, will be allowed, according to the new rules, according to news reports.

Likewise, in Pennsylvania, the sudden shutdown of the construction industry has led to layoffs across the state, according to reports.

More than 230,000 people in Pennsylvania work in the construction industry, including 11,050 managers, according to the U.S. Bureau of Labor Statistics.

In the Harrisburg-Carlisle region of Pennsylvania, about 8,790 workers, including 490 managers, work in the construction industry, which is a little less than three percent of workers in the area.

“What usually takes months or quarters to happen in a recession is happening in a matter of weeks,” Michelle Meyer, chief U.S. economist for Bank of America Merrill Lynch, was quoted.

But in Oregon, construction continues while workers become increasingly concerned.

Ben Basom, a carpenter and spokesman for the Pacific Northwest Regional Council of Carpenters, which represents 6,500 workers in Oregon (4,000 in the Portland area), was quoted that he isn’t so sure he wants his members on construction sites, according to a report.

“Our union likes the idea of shutting down work on anything that’s not legitimately essential—like hospitals or roads,” Basom was quoted. “It feels strange to me. We’re normally out there looking to increase market share and get more jobs.”

On 23 March, Oregon Gov. Kate Brown ordered the shutdown of many businesses. But among those that are still open are a lot of construction sites, and that’s causing an avalanche of workplace complaints.

But in the week beginning March 23, the day Brown issued her order, the agency received 1,152 COVID-19-related complaints. In a typical year, Oregon OSHA gets 2,000 complaints.