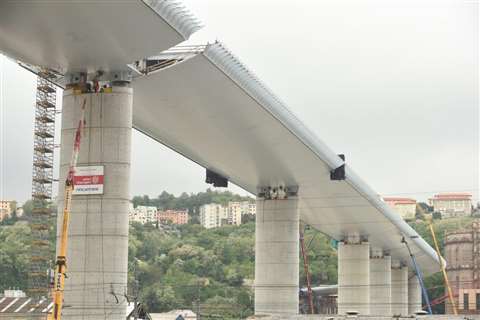 Final span is moved into position on the new Genoa bridge

Just 10 months after breaking ground on the new Genoa bridge, infrastructure specialists Salini Impregilo and Fincantieri have installed the last span of the deck, signalling the completion of the project.

As construction work finished, the two companies took part in an event to commemorate the occasion, only 19 months after the tragic collapse of the previous Morandi bridge.

The final span, measuring 44m in length and weighing 900 tonnes, was raised by strand jacks installed at the tops of piers 11 and 12, at a speed of 5m per hour. The deck’s total length is 1,067 metres.

In the presence of city and national officials, including Italy’s Prime Minister Giuseppe Conte and Genoa’s mayor Marco Bucci, Salini’s chief executive Pietro Salini, said, “I remember August 14, 2018, when we all looked in shock and with a feeling of powerless at site of the smoke that rose from the wreckage of the bridge with 43 victims: an unimaginable and unacceptable tragedy for a country with our knowledge and our ability to build infrastructure still today with our hands. 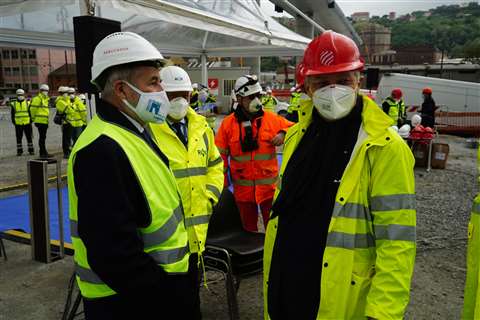 “Now that we are in this pandemic that has denied us the pleasure of embracing each other, I would like to shake in a virtual way all the hands of the men and women who were able to build this bridge, because you are the extraordinary people who have closed a deep wound held by this city.”

Salini added, “As Italians, we have a rich history in infrastructure. There are public works built by the ancient Romans 2,000 years ago that still exist and function. But today, public works are not eternal, they have a limited lifespan and are in need of maintenance.

“From this city a message of hope and future goes out, a great plan for the construction and maintenance of infrastructure in our country that would create millions of jobs. Let’s begin immediately with a new Marshall plan, using the success of this bridge as a model for the relaunch of Italy.”

The event, celebrating the bridge’s completion, coincided with the World Day for Safety and Health at Work, initiated by the International Labour Organization (ILO).

Salin said, “We are fully aware that the COVID-19 pandemic has forced us to rethink completely how we behave. It is an emergency that has unequivocally left its mark, splitting life in two, between the one that we had before it and the one that we will have after it. In Genoa, we have shown that it is possible to work in safety thanks to the measures taken and the commitment of hundreds of people today on site”.

A timelapse video of the bridge’s construction can be seen here.